Home > What to See and Do > Mouraria 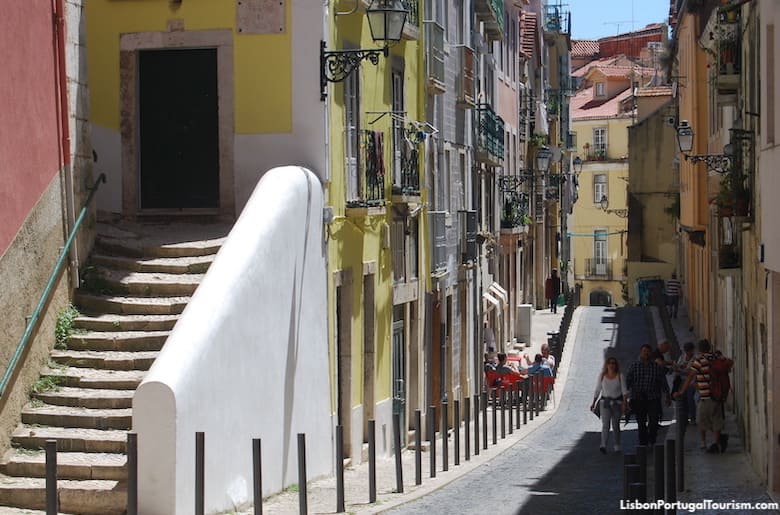 This hilly medieval quarter is Lisbon’s most multicultural, with over 50 nationalities living in its jumble of streets directly below the walls of the castle. On the lower part of the hill is a little “Chinatown” (which could also be considered an “Asiantown”) and it’s a great place to try different ethnic cuisines (from Chinese to Indian). 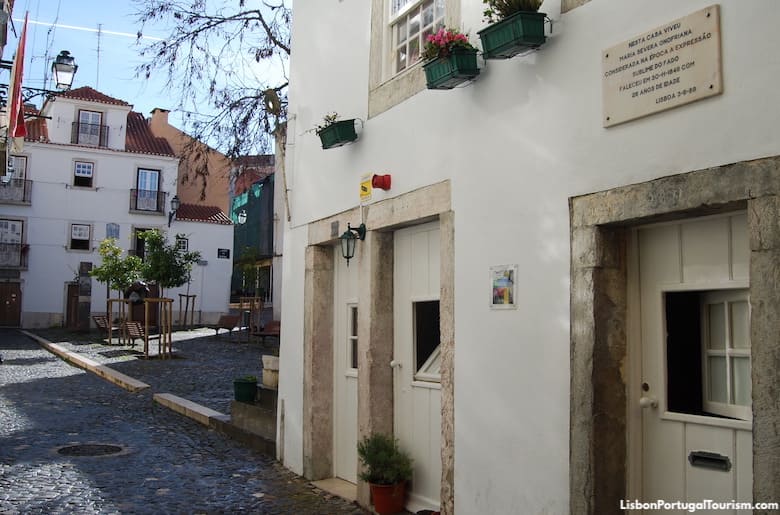 Mouraria literally means “Moorish quarter.” It was where the Moors who weren’t slaughtered when King Afonso Henriques conquered the city in 1147 were allowed to live -- until 1497, when they and the Jews were expelled from Portugal.
It was the birthplace of fado, Lisbon’s soulful musical genre, as it was where the legendary singer Maria Severa lived in the 1800s. She was the first famous fado singer, taking the music of the people to the aristocracy, when she fell in love with a count. Many residents have followed in her footsteps since then, including Mariza, who is the biggest name in contemporary fado. The house where Severa lived was given a contemporary makeover and is one of the places to listen to fado in the neighborhood. 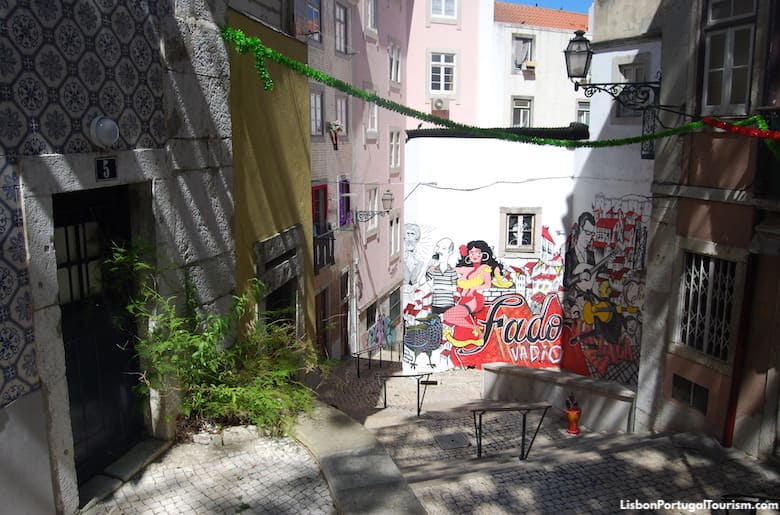 The narrow streets on the upper part of the hill are also wonderful to walk around at a leisurely pace, as it’s brimming with picturesque corners and charming little squares. A good place to start is Rua do Regedor, by Rua da Madalena in Baixa, which leads to the old streets of Mouraria. On that street, you’ll see a Manueline (Portuguese Gothic) portal, which was the gateway to a palace where Eleanor of Portugal, daughter of King Duarte, was married to Frederick III of Germany in 1452. 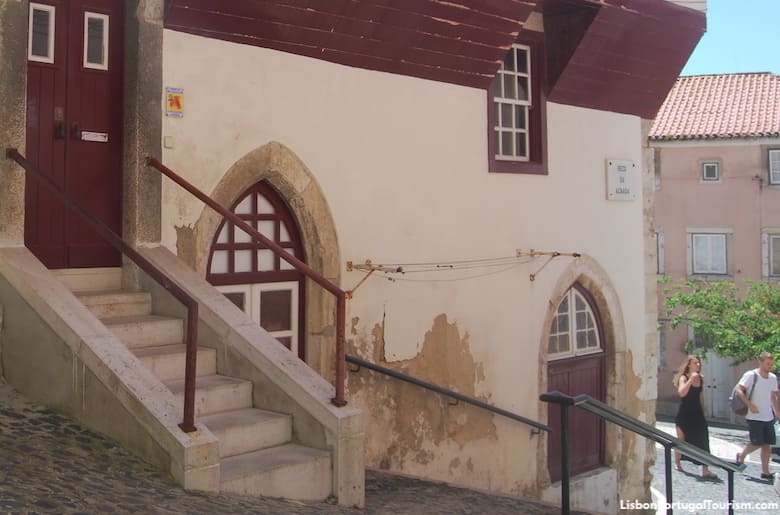 One of Lisbon's oldest houses, on Largo da Achada

Walking past tile-covered buildings, you arrive at Largo de São Cristóvão, home to St. Christopher’s Church (see below) and where you find a series of steps leading to a mural paying tribute to fado singers. Turning right around the church, up the steps of Beco de São Francisco, and turning left, you reach Largo da Achada, a tiny square with a small drinking fountain and one of Lisbon’s oldest houses (built in the 1500s, it maintains its curious gothic windows). 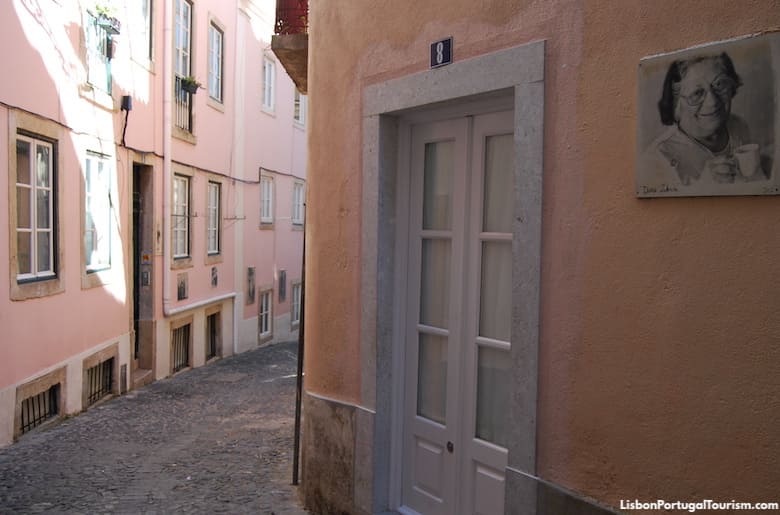 The narrow Beco das Farinhas, with one of the many black-and-white photos on the façades

Like elsewhere in the city, many of the buildings are adorned with tiles, but here you’ll also see black-and-white photographs on the façades. They’re the work of British-born artist Camilla Watson, who lives in the neighborhood and was allowed to create an open-air gallery celebrating the elderly locals (many of whom are being forced to move out of their homes, as the area becomes more gentrified). 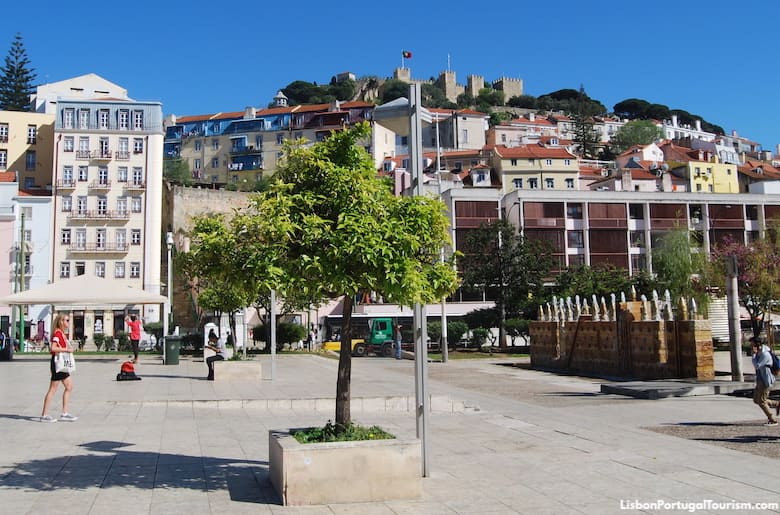 The hill of Mouraria ends at Praça Martim Moniz, the terminal of popular tram 28. Going up Rua da Palma and Avenida Almirante Reis, you pass by the many Chinese and other ethnic businesses of the neighborhood, and reach Largo do Intendente, home to one of Lisbon’s most beautifully tiled buildings (see below).

What to See and Do in Mouraria 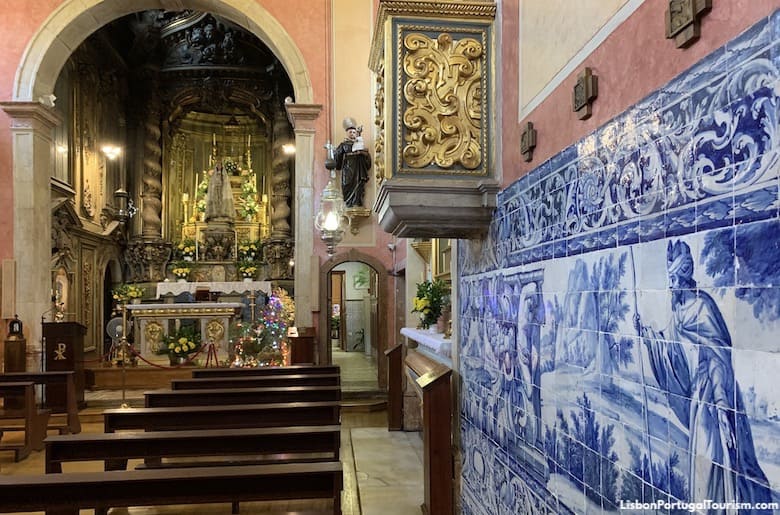 A chapel built in 1505 in Praça Martim Moniz, was dedicated to Our Lady of Good Health in 1569, after the plague killed thousands of people in Lisbon. It was damaged in the 1755 earthquake, so this small church took its place. It kept the early-18th-century portal, and the interior has tile panels from that period. The chancel is decorated with rococo-style gilded woodwork, and houses an image of the Virgin. Outside, the façade is reflected on the cobblestone pavement, created by the artist Eduardo Nery in 1991. One of Lisbon's biggest religious ceremonies (a procession, traditionally held every year since the 1500s), happens at this church, when its image of Our Lady of Good Health is taken through the streets. 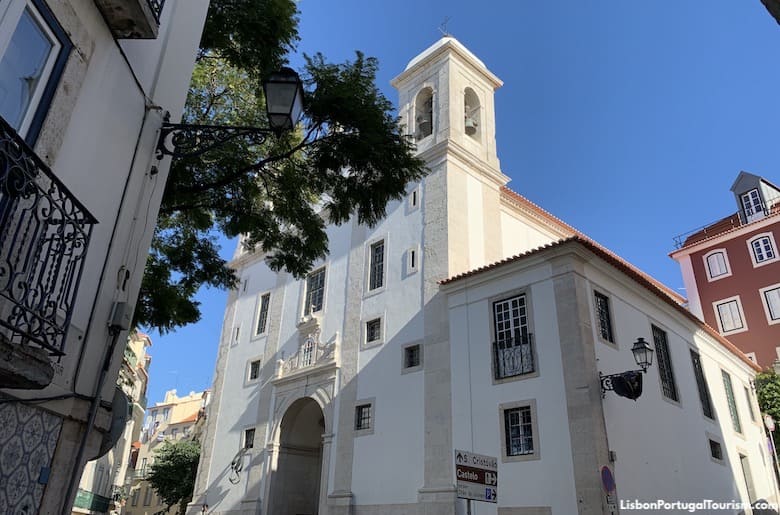 St. Christopher’s Church was originally built in the 13th century, but a fire in the 16th century forced its reconstruction. The 1755 earthquake did not cause much damage, and the interior is filled with paintings in gilded frames, while the ceiling is covered in ornamental painting. It features a total of 36 paintings by Bento Coelho da Silveira (one of Portugal's prominent 17th-century artists), created between 1690 and 1703, which have been in a process of restoration. One of them is a "Last Supper," which was missing for several decades but was found behind the main altar. It was one of the first to be restored and is now on display. Due to leaks and deterioration of the roof, the entire interior is currently in need of an urgent restoration, leading the World Monuments Fund to place it on the list of 50 monuments considered "at risk" around the world.
Behind it, following Beco de São Francisco to the left of the entrance, is the tiny square Largo da Achada, with a curious medieval house.

Largo de São Cristóvão
It's closed on Sundays and Mondays. It opens from 10am to 1pm and from 2pm to 6pm from Tuesday to Saturday. There’s a weekly Mass on Saturdays, at 6:15pm. 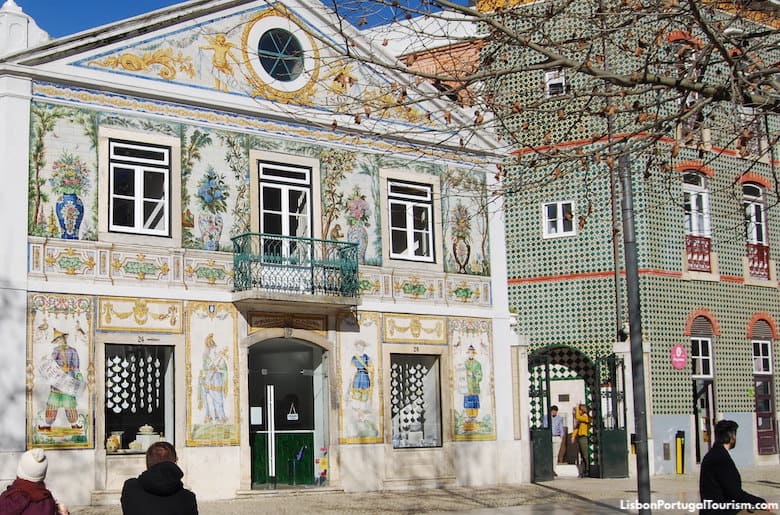 Used as a parking lot and for illicit activities for several years, this square was finally cleaned up in 2012, and is once again an inviting place. Several of the buildings have been renovated, including the most beautiful one, designed in the Art Nouveau style and distinguished with the local architecture prize in 1908. It's a building with a small dome that borders Avenida Almirante Reis, and is now a hotel. At the center of the square is a wrought-iron sculpture created by the artist Joana Vasconcelos, meant to be a small garden where you may sit and admire the beautiful tile-covered façade from 1865. It features images of Asians, recalling Portugal’s trade with the East, and until 2021 it belonged to the Viúva Lamego tile factory.


How to Get to Mouraria


The terminal of famous tram 28 is at the doorstep of Mouraria in Praça Martim Moniz. The Martim Moniz metro station (on the green line) is a few feet from the tram stop. However, neither the tram or the metro are the most recommended ways to reach the more charming narrow streets and hilly corners of the neighborhood. It’s best to walk there instead, from Rua da Madalena in Baixa (downtown). From Rua da Madalena, turn to Largo Adelino Amaro da Costa and go up Rua do Regedor, which leads to the Church of St. Christopher and some of the neighborhood’s most colorful spots. Largo do Intendente has a metro station nearby -- “Intendente” on the green line.
You may ride the tram and the metro, as well as the city's buses, funiculars and trains for free with the Lisboa Card.


Where to Stay in Mouraria 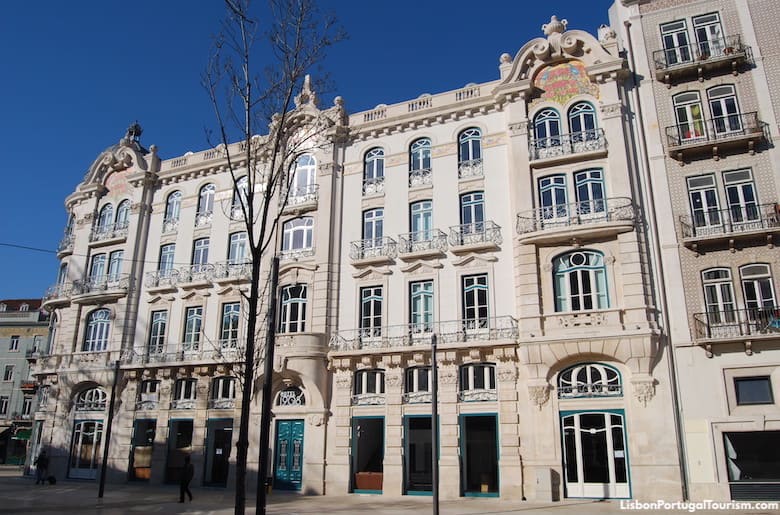 A building from 1908, distinguished in its first year as one of Lisbon’s most beautiful, was completely renovated and transformed into a 4-star hotel in 2017. It maintains the Art Nouveau architecture of the exterior, with tiles, a small dome and wrought iron details, while the interior features a vintage and minimalist décor, together with pieces by local artist Bordalo II. The four floors house 36 rooms, a restaurant, and a bar and café with outdoor seating. 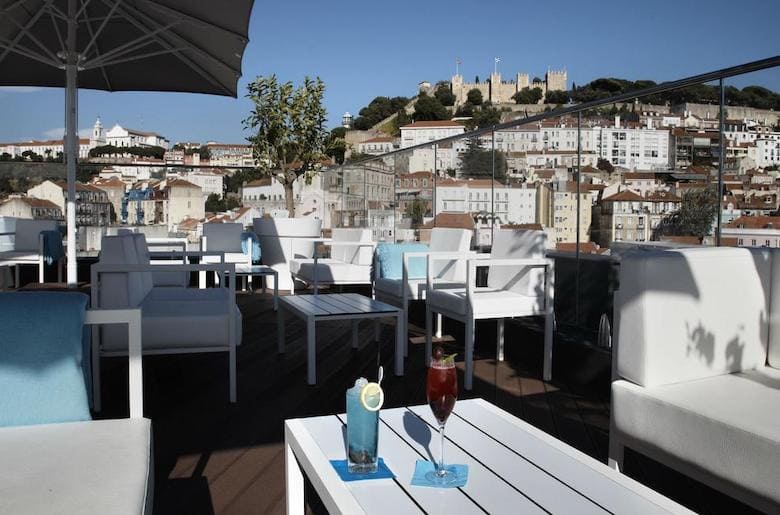 Opened in 1958, this modern hotel faces the heart of Lisbon’s "ethnictown" (Martim Moniz Square). Many of the rooms offer good city views, as does the restaurant at the top and the rooftop bar. 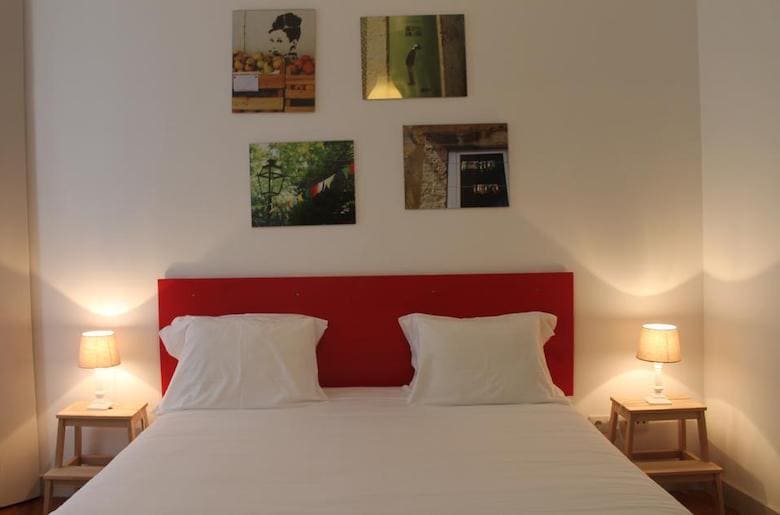 For budget travelers, this hostel is an excellent choice, as it’s located in one of Mouraria’ most accessible streets and a short walk from downtown. It has dorms, twin and double rooms, with shared or private bathrooms. 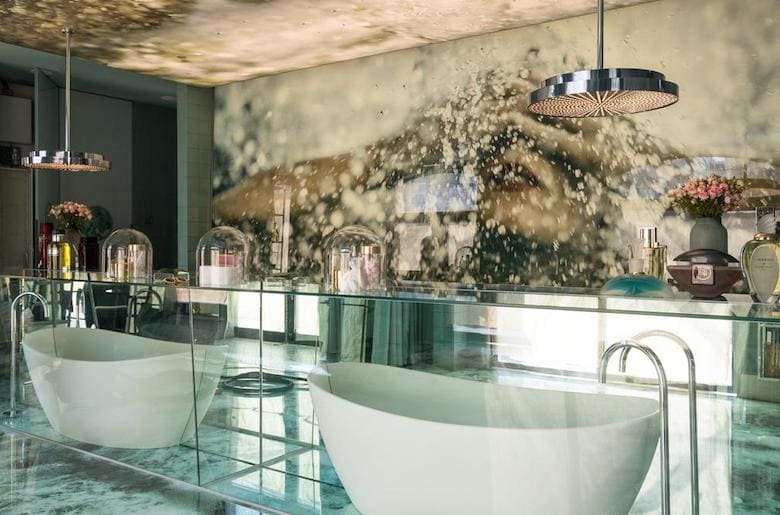 Ever wondered what it would be like to sleep in a bathroom? Now you can find out, at this hotel designed to look like one big bathroom. But it’s not just any bathroom, as it features a luxurious décor, with mirrors and tiles covering the walls, and bathtubs in different spots, including at the reception, where you also see showers over the counter. On the hallways, the walls simulate water falling, while perfume bottles decorate the rest of the space. The restaurant serves Portuguese cuisine, and there’s also a terrace facing one of the city's busiest avenues, a short walk from Mouraria.