Home > What to See and Do > Parque das Nações 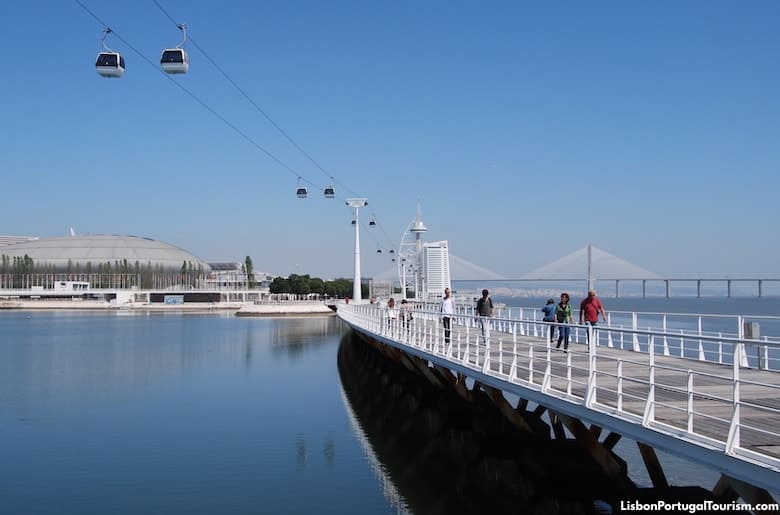 View of Parque das Nações from the boardwalk by the Oceanarium

Eastern Lisbon used to be an ugly industrial area, until it was chosen as the site to host the last World Fair of the 20th century, Expo 98. Now called Parque das Nações, this part of the city is still often referred to as “Expo” by some locals. Since the fair, it has been reborn into a futuristic glass-and-steel district, home to some striking examples of contemporary architecture. Many are structures left behind by the event, while others are more recent constructions that kept the oceanic theme, like the twin towers São Gabriel and São Rafael (built between 2000 and 2004), which resemble ships and are named after two of Vasco da Gama's vessels. 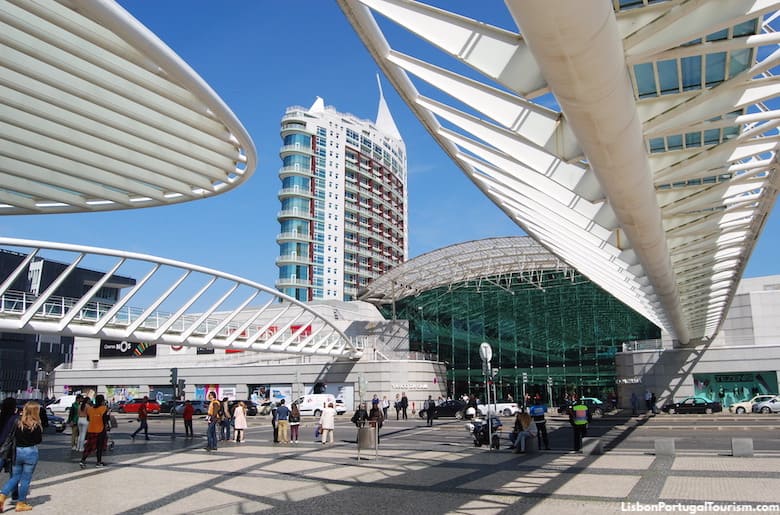 One of the landmarks from the World Fair is the Santiago Calatrava-designed Oriente Station, while Pritzker Prize-winning architect Álvaro Siza Vieira is the man behind the fantastic Portugal Pavilion, known for its remarkable undulating roof. The main attraction, however, is the state-of-the-art Oceanarium, one of the world's most spectacular aquariums. 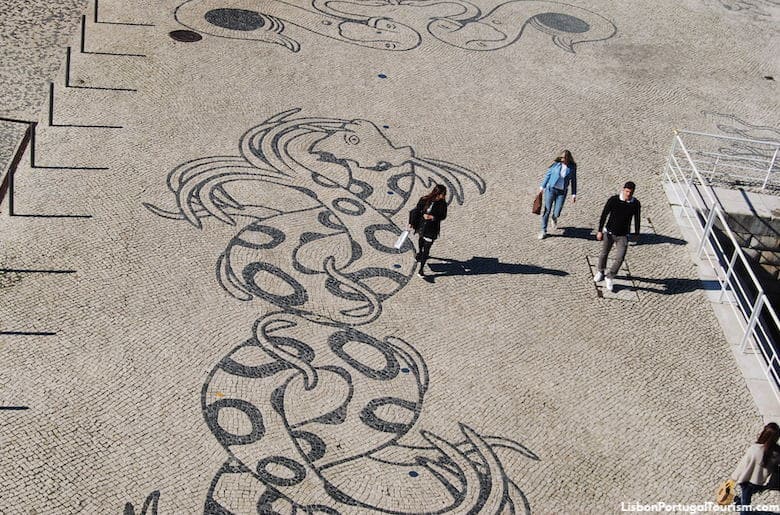 "Sea monsters" in cobblestone around the Oceanarium

The scenic 5km(3 miles)-long waterfront promenade and its green spaces with exotic trees attract locals walking their dogs, jogging, or cuddling on the benches. Surprisingly, not many tourists pass by, but there are always a few posing for selfies with Europe’s longest bridge as a backdrop. 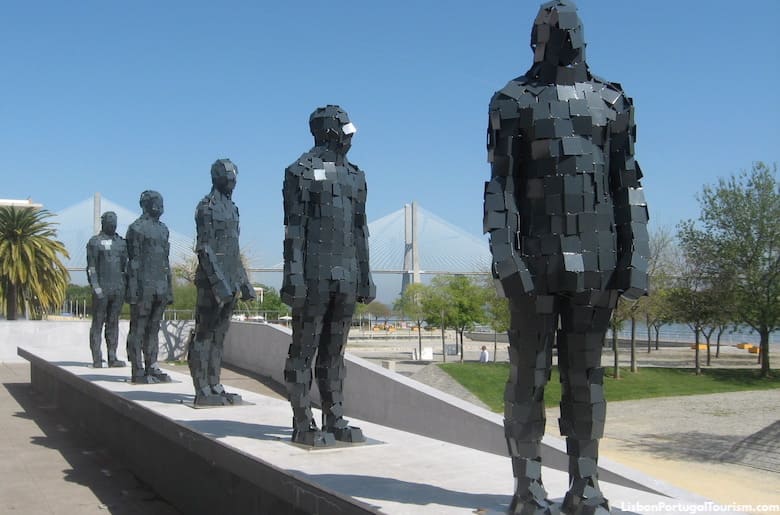 This is also an open-air museum, with dozens of pieces of public art by local and international artists. There are sculptures, tile murals, water volcanoes erupting, wave-shaped benches, and even modern interpretations of Lisbon’s traditional cobblestone pavements. The most fantastic work of cobbled art, however, is a group of “sea monsters” that can be seen around the Oceanarium. 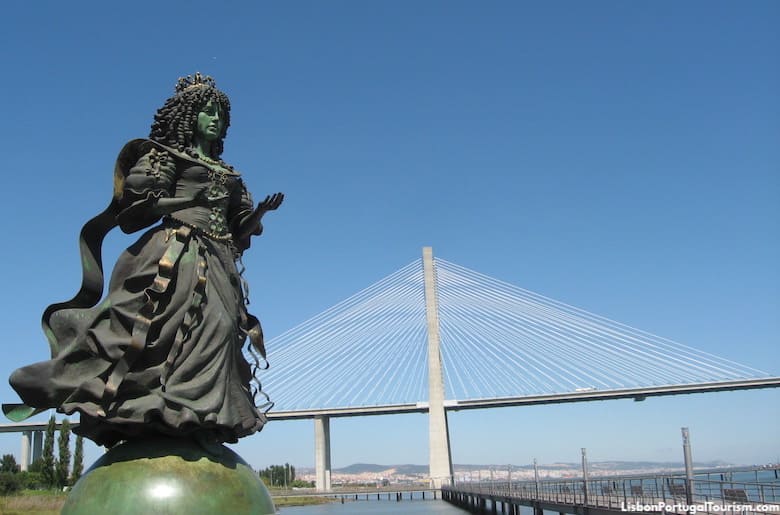 Close to the bridge is a statue of Catherine of Braganza, a Portuguese princess who became the queen of England when she married King Charles II. This is a smaller version of a colossal statue by American artist Audrey Flack, that was to be placed by New York's Hudson River, as the borough of Queens was named after the Portuguese princess and English queen. However, that project was scrapped, when the African-American community protested, remembering that Catherine’s family had ties to the slave trade.
The entire district is overlooked by cable cars, offering a view of an unashamedly avant-garde side of Lisbon, contrasting with its old historic center.

What to See and Do in Parque das Nações 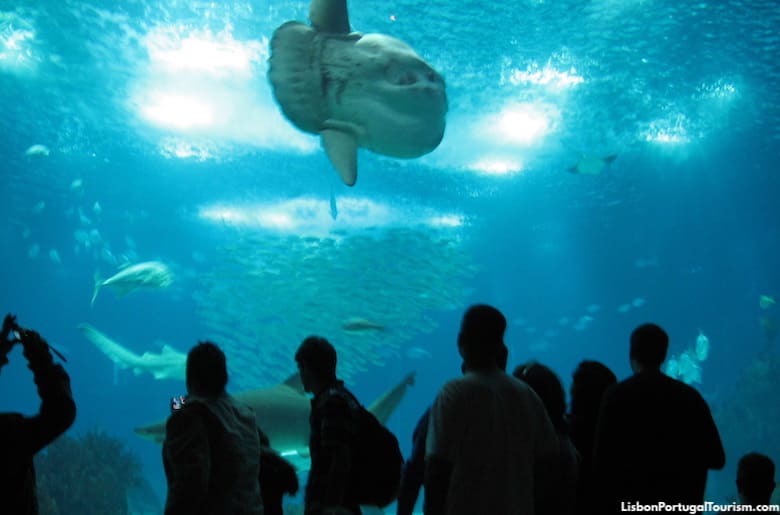 One of the legacies of 1998’s World Fair, whose theme was the oceans, was one of the world’s biggest aquariums. More than size, however, it stands out for its design. The over 25,000 sea creatures seem to be swimming together, but sharks are separated from smaller defenseless fish by invisible acrylic walls. This is the first aquarium to place all world ocean habitats together, and presents several marine species, from the curious round stingrays to the giant sunfish, seahorses, otters, and penguins... The main, gigantic tank, which is seen from four different levels, is in the original building which rises from the river, while sea turtles can be seen in an annex inaugurated in 2011. High-tech displays explain everything in different languages. 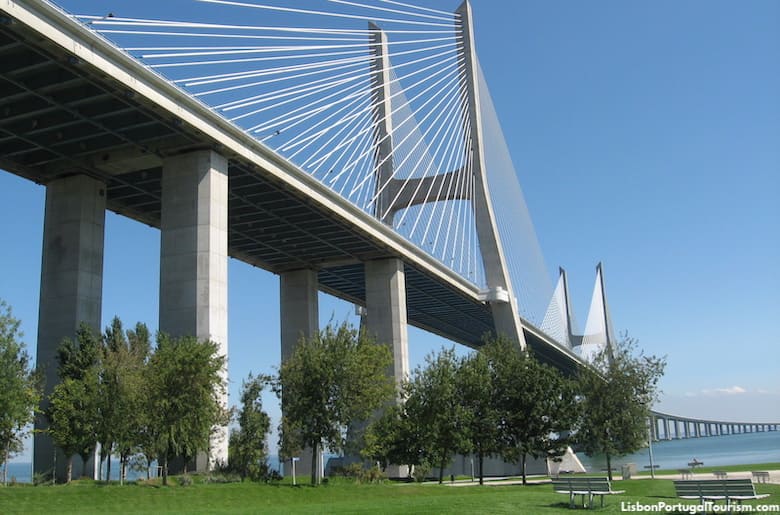 Inaugurated in March of 1998, just before the opening of the World Fair, this bridge acts as a highway over the river. It offers a view over Parque das Nações from its six traffic lanes, and connects Lisbon to the south of Portugal and Spain. Its 17.3 kilometers (10.7 miles) in length make it the largest in Europe and one of the ten longest in the world. It seems to almost vanish into the distance when seen from Parque das Nações’ waterfront promenade, which is the perfect vantage point and the best spot for photos. Its name honors Vasco da Gama, who was the first European to reach India by sea (opening trade between East and West), exactly five centuries before its inauguration. 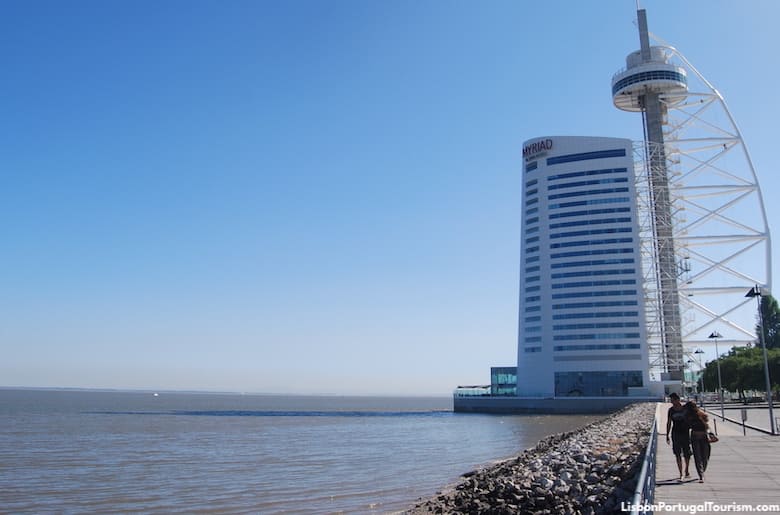 Built as an observation tower with panoramic elevators, it was expanded in 2013 to become a hotel. The top deck, from where there are bird’s-eye views of the river, over Vasco da Gama Bridge and all of Parque das Nações, is now a Michelin-star restaurant. The tower is 142 meters high (466 ft), making it the tallest building in the city and one of its main landmarks. Its Dubai-like architecture recalls the sailing ships that took Vasco da Gama to India in the 15th century. 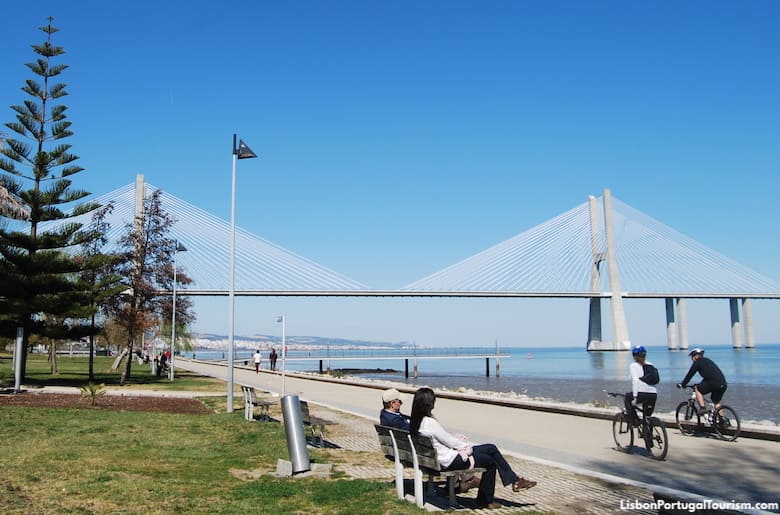 This waterfront park is popular with residents of Parque das Nações. They jog, cycle, walk their dogs, and play soccer, as very few tourists pose for selfies on the boardwalk with Vasco da Gama Bridge behind them. A skate park almost directly below the bridge attracts local teens. This is also a good place for birdwatching, as it’s the habitat of different aquatic species, such as flamingos, who look for food in the shallow areas at low tide. 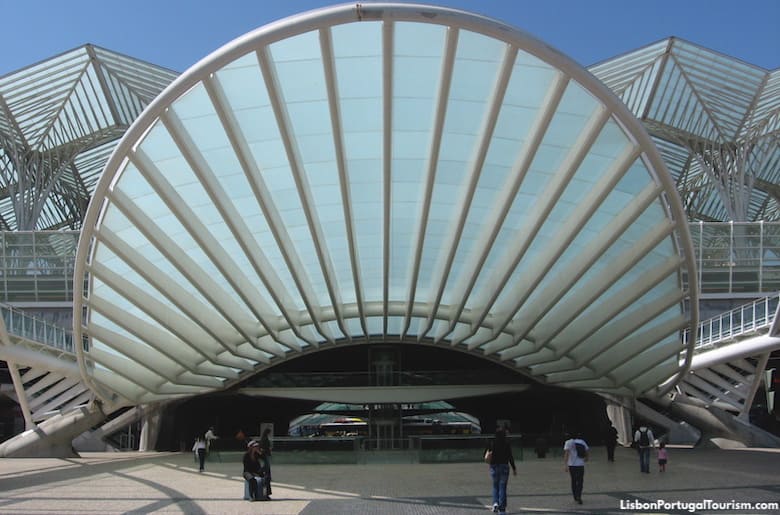 This monumental station was designed by renowned architect Santiago Calatrava, who used steel and glass to create shapes inspired by ocean waves, trees in a forest, and the arches of a Gothic cathedral. It was built to provide access to the site of the World Fair in 1998, and nearly two decades later the same architect used a similar design for the new World Trade Center station in New York. Lisbon’s station houses a train, metro and bus terminal. The metro platform gives a new meaning to “underground art,” with large contemporary tile panels by international artists. 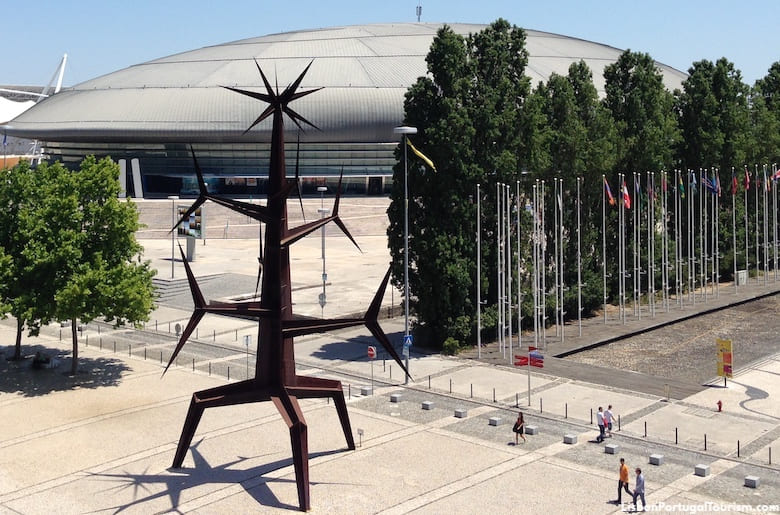 What looks like a spaceship or a turtle, is an arena used for Lisbon’s biggest concerts and events. It has hosted some of the world’s chart-topping pop stars, the Tennis Masters championships, the MTV European Music Awards and the Web Summit. Originally called Atlantic Pavilion, it was built for the World Fair in 1998, and holds up to 15,000 spectators. 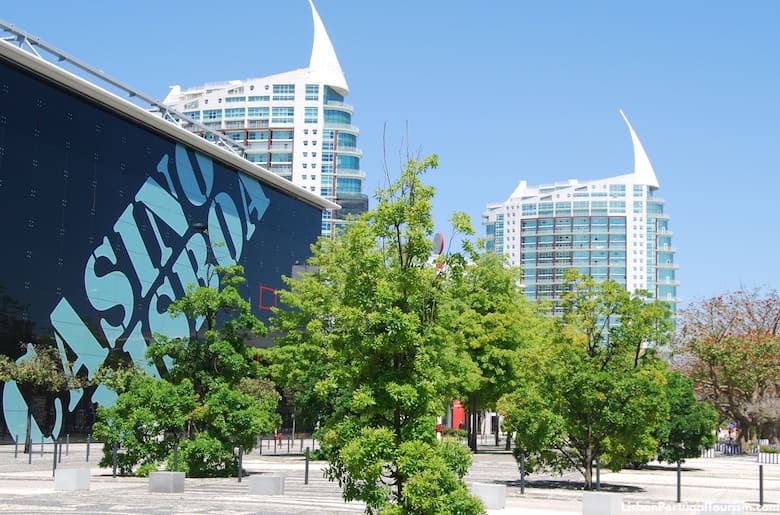 Lisbon's casino is a younger and more contemporary version of the largest casino in Europe, which is found outside the city in the seaside town of Estoril. In addition to the 28 gaming tables and 1100 slot machines expected at any casino, there is a large minimalist space for eating and drinking. An auditorium presents national and international shows, and there are also performances at the rotating "Arena Lounge." So far, the biggest prize ever received from a machine was 357,993 euros, in April of 2010.
Admission is free, but you have to be 18 to enter.

Alameda dos Oceanos
It opens everyday, from 3pm to 3am (4pm to 4am on Fridays and Saturdays)
www.casino-lisboa.pt 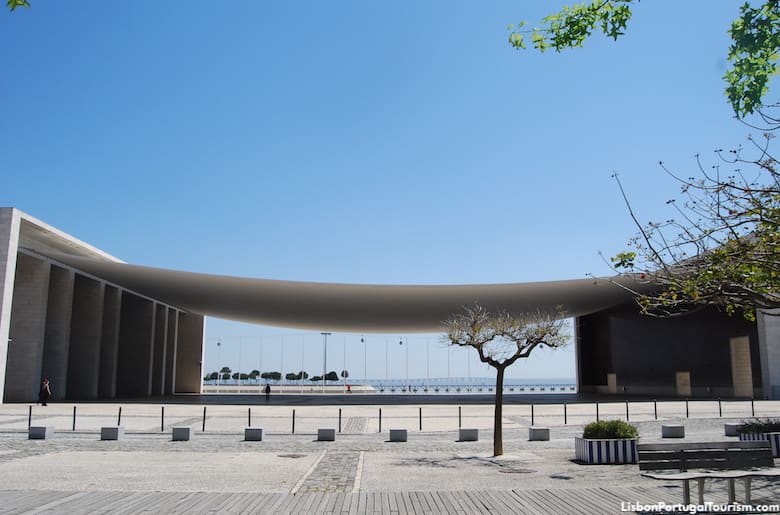 Recognized as one of Lisbon's most emblematic and remarkable examples of contemporary architecture, this building is another landmark from the 1998 World Fair. It draws attention for its sagging, gravity-defying roof (a "sheet of concrete") which joins two annexes, designed by Pritzker Prize-winning architect Álvaro Siza Vieira. The interior is not regularly open for visits, but it occasionally hosts special events. In 2015 it was acquired by Lisbon University, which uses it for the promotion of science and culture, especially in relation to the environment, energy and the Portuguese-speaking world. 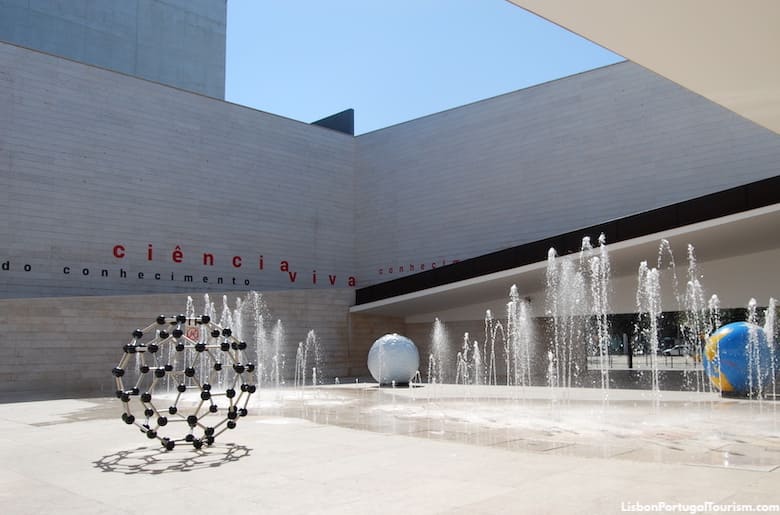 Located by the Oceanarium, the “Knowledge Pavilion” also dates from the World Fair, and is now an interactive science museum with highly-educational exhibits, using cutting-edge technology. The fun displays and simulations, which explain the use of technology in everyday life, make it a popular attraction for children and adults alike. Gene Cernan, the last man to walk on the moon, was one of the visitors, in 2001. 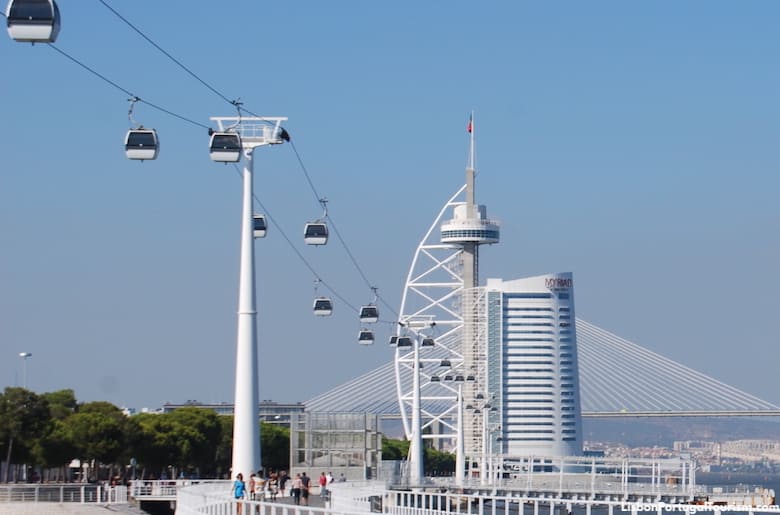 Cable cars run from the Oceanarium to the Vasco da Gama Tower, offering around 10 minutes of stunning views over the area’s different attractions. They’re fairly low to the ground, so you can see everything quite clearly.
There’s a 10% discount with the Lisboa Card. 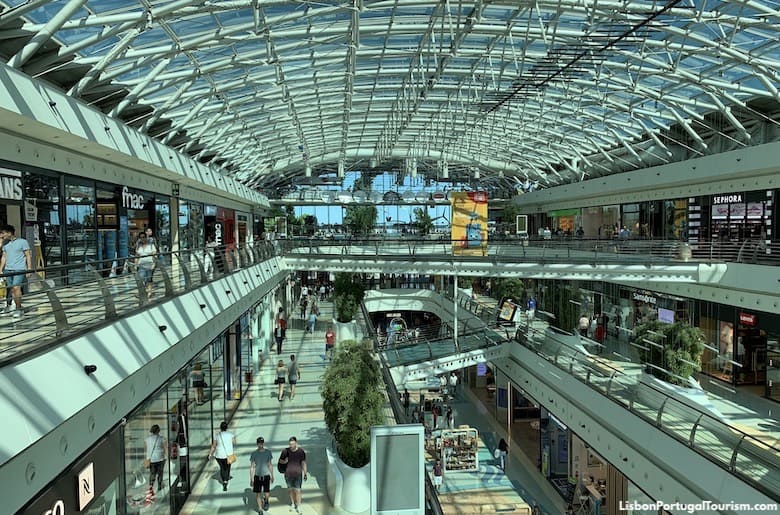 With water flowing over the glass roof, this is the most attractive Lisbon shopping mall. It's especially popular on weekends, when families go to the Oceanarium and the other attractions nearby, and the local youth is the majority whenever there's a concert at Altice Arena. The multiplex cinema is another draw, as is the huge Continente hypermarket. Other popular stores include Fnac for gadgets and books, and a large Zara for men and women's fashions. In total there are over 150 stores plus the city’s most pleasant food court, as it includes a wonderful deck on the upper floor overlooking the waterfront.


How to Get to Parque das Nações


Take the metro (red line) to Oriente Station. Alternatively, hop on a train that departs around every half hour from Santa Apolónia Station. It’s an urban or regional service with suburbs or different towns as the final destination, but that passes by Oriente Station in just 8 minutes.
A much slower option is taking bus 728 that goes down the waterfront, past Belém, Praça do Comércio and Santa Apolónia Station, towards Parque das Nações.
You may ride the trains, the bus, and the metro, as well as the city's funiculars and trams for free with the Lisboa Card.


Where to Stay in Parque das Nações 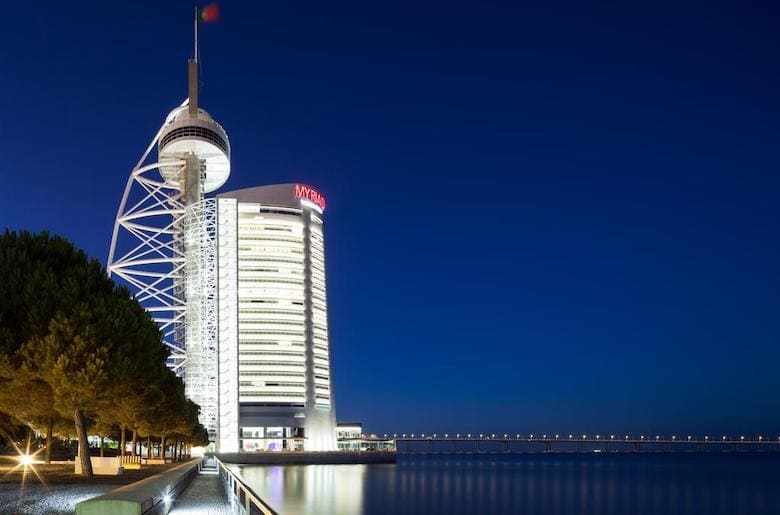 This landmark hotel is incorporated into the city's tallest monument, the Vasco da Gama Tower. It rises from the river, offering stunning views from its 176 rooms featuring contemporary design. Facilities include a spa, indoor pool, restaurant, bar, and meeting rooms and conference center. The city's best contemporary architecture is all around, and the metro from the stunning Oriente Station takes you to the center. 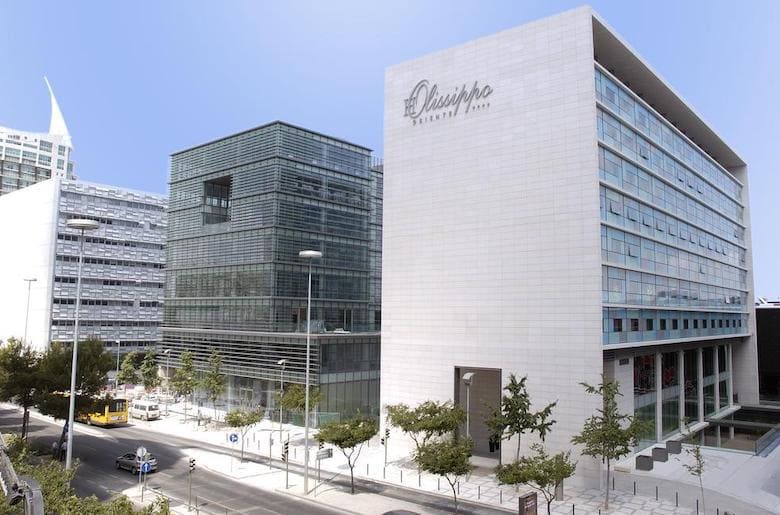 Found by Casino Lisboa and the Oceanarium, this hotel has 182 comfortable rooms in pastel colors. It also offers five meeting rooms for business travelers. 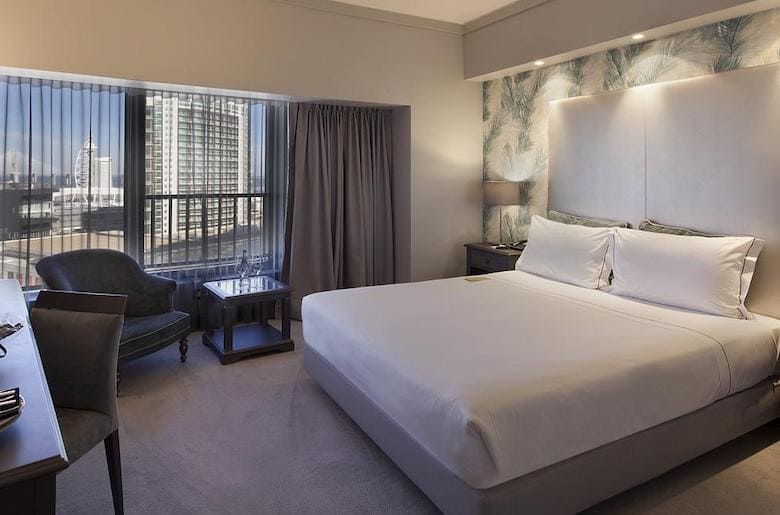 This hotel is right next to Oriente Station and mostly attracts business travelers for the convenient location not far from the airport. There are conference facilities for over 250 people, river views from many of the rooms, and an indoor pool and sauna for after a day around the city. The rooftop bar has one of the best views of Parque das Nações. 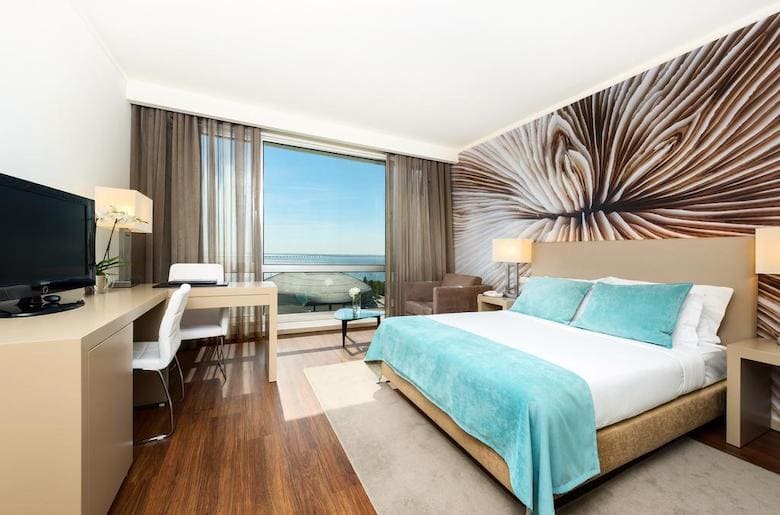 This high-rise hotel is well located by Oriente Station. Rooms are spacious, and many have river views. It attracts business travelers, but is also a good choice for families, with some rooms accommodating as many as two adults and two children. 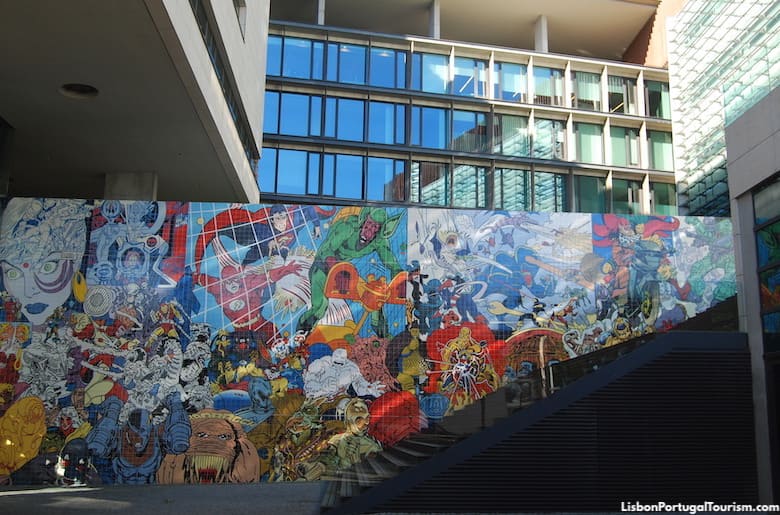 This hotel features modern design in its 300 rooms and common areas. It's essentially a business hotel, with eight meeting rooms with capacity for between 30 and 300 people. Be sure to note the colorful tile panels by the entrance. They’re the work of Icelandic artist Erró, who illustrated characters from American comics and science fiction, creating a curious example of pop art on tile.