Guide to the Main Routes


Buses go everywhere in Lisbon. Carris is the local bus company, and all vehicles are yellow. Most operate between 6:30AM and midnight. All bus rides are free with the Lisboa Card, except the AeroBus 91 to and from the airport.
Rede Expressos is the main bus operator for long-distance services within Portugal. Its terminal is Sete Rios, which is found right outside the Jardim Zoológico metro station.
Here are some Lisbon bus routes that take you to some of the city's top attractions: 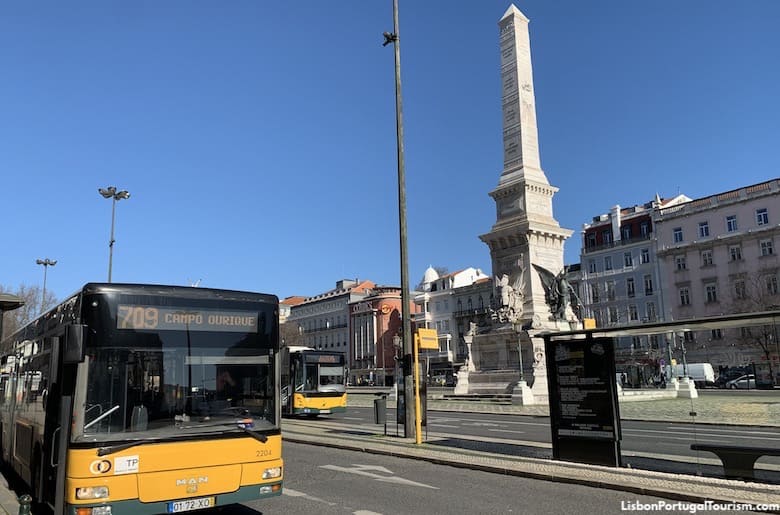 The 709 stop on the western side of Restauradores Square

Trams 25 and 28 are usually how tourists get to the neighborhood of Campo de Ourique, but locals know that the fastest and most comfortable way to get there is bus 709, which departs from Restauradores Square, around every 15 or 20 minutes, depending on whether it’s a weekday or the weekend. 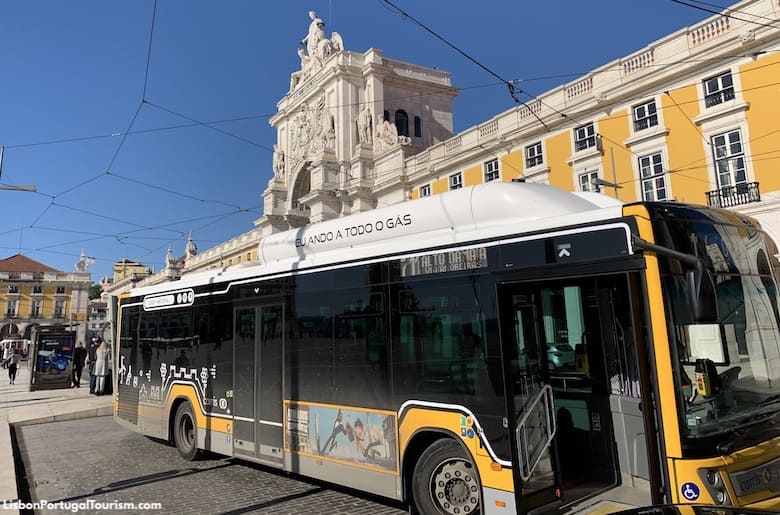 The 711 stop in Praça do Comércio (marked "Terreiro do Paço")

You should take this bus if you want to go to the Monsanto Forest Park. It departs from Praça do Comércio to the suburb of Amadora, passing by the Amoreiras mall before stopping at the park.

Bus 714 to the Ancient Art Museum, Lx Factory and Belém 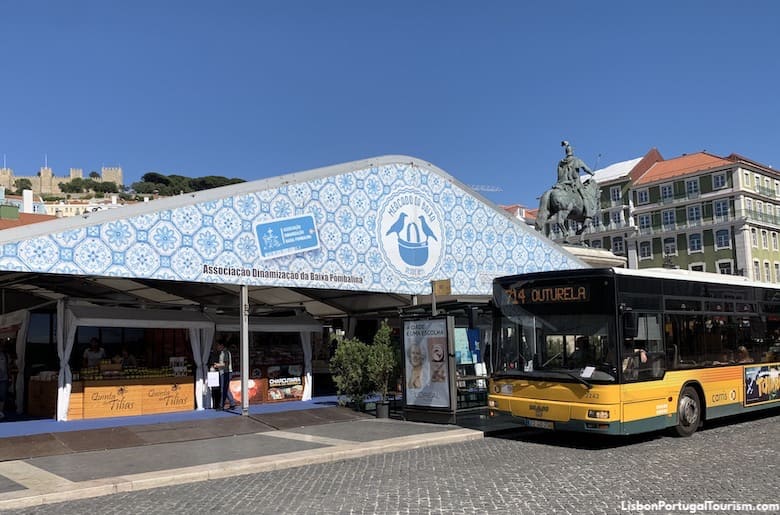 The 714 stop on the western side of Praça da Figueira

This bus departs from one of the city's main squares (Praça da Figueira) and passes by several attractions, so it's always packed. It also passes by the city's campsite, so it's one of the most popular buses throughout the day, with both locals and tourists. It takes you right to the entrance of the Ancient Art Museum (stop: "R. Janelas Verdes (Museu Nac. Arte Antiga)"), just around the corner from Lx Factory (stop: "Calvário"), and continues to Belém, stopping right next to the Jerónimos Monastery. From its departure point in Praça da Figueira to the monastery, it’s about 30 minutes.

Bus 727 to Lx Factory and Belém 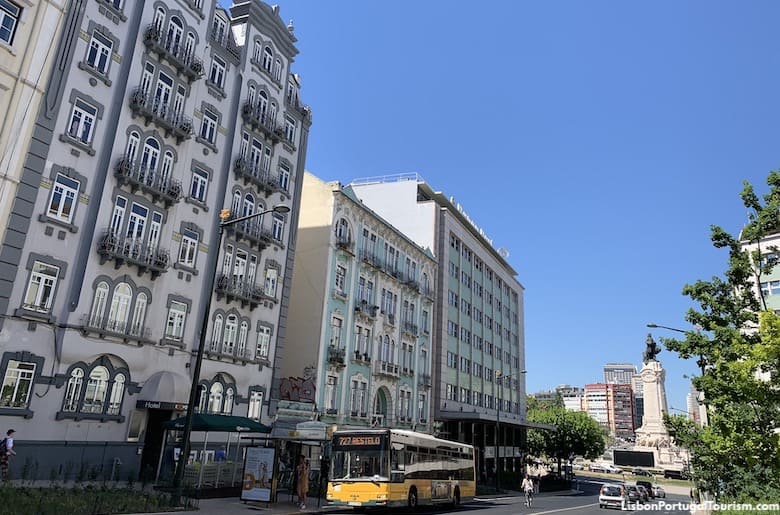 The 727 stop on Rua Braamcamp, by Marquês de Pombal Square

This bus goes through the Avenidas Novas district, passes by Marquês de Pombal Square, and continues towards Belém, passing by the Amália Rodrigues House-Museum and São Bento Palace in São Bento, the Ancient Art Museum, by the Lx Factory (stop: "Calvário"), the Jerónimos Monastery, and Igreja da Memória.
Between Marquês de Pombal Square and the monastery it's about 40 minutes. 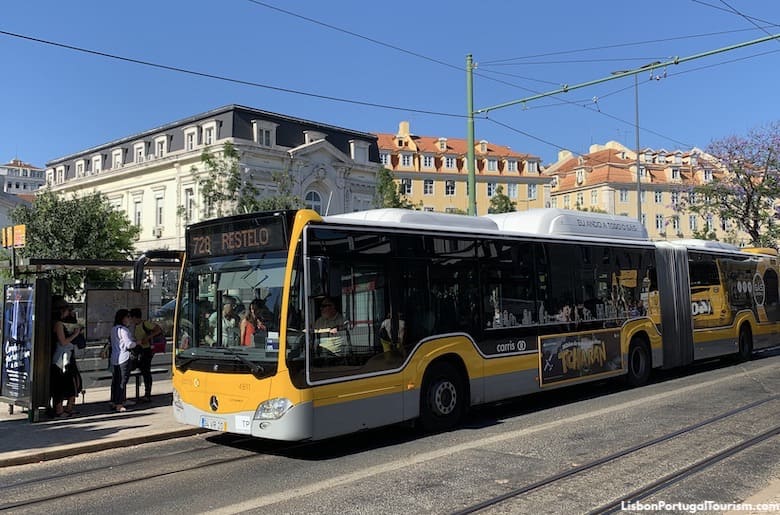 The 728 stop outside Cais do Sodré Station

Bus 728 departs from eastern Lisbon, goes past Oriente Station in the Parque das Nações district, and ends its route in Restelo, on the western side of the city. In between, it goes down the waterfront, past Santa Apolónia Station, Praça do Comércio, Cais do Sodré Station, Avenida 24 de Julho just below the Ancient Art Museum, Alcântara-Mar station by Docas de Santo Amaro and 25 de Abril Bridge, and the district of Belém (it stops by the Coaches Museum and the Jerónimos Monastery).
Between Praça do Comércio and the stop by the monastery it’s about 20 minutes. The fastest way to get to Belém from downtown, however, is by train: Train to Belém 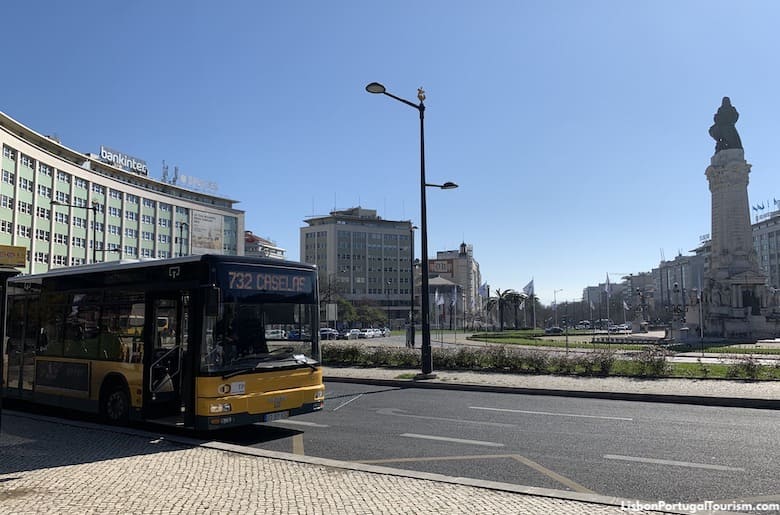 This bus departs from Marquês de Pombal Square, goes down Avenida da Liberdade and Baixa, and then down the waterfront through Cais do Sodré and Santos. It passes by Lx Factory (stop: "Calvário"), then heads to the neighborhoods of Ajuda and Restelo, passing by Igreja da Boa Hora.

Bus 737 to the Castle and Alfama's Viewpoints 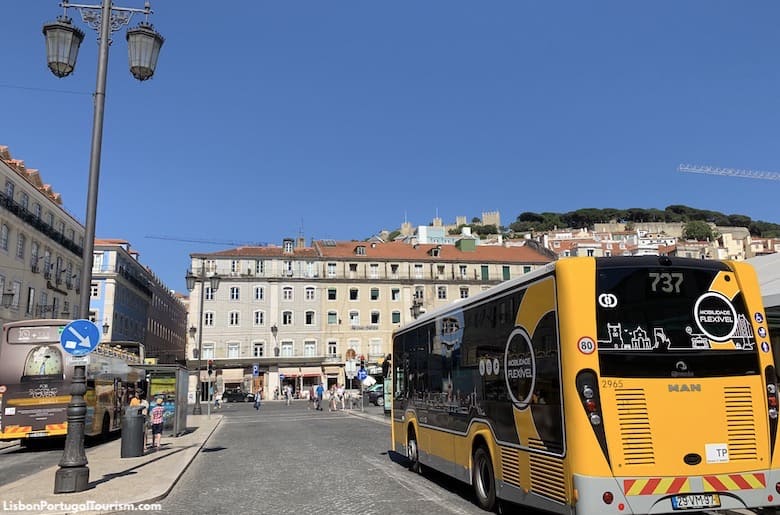 The 737 stop on the northern side of Praça da Figueira

Bus 758 to Príncipe Real, Amoreiras and the Aqueduct 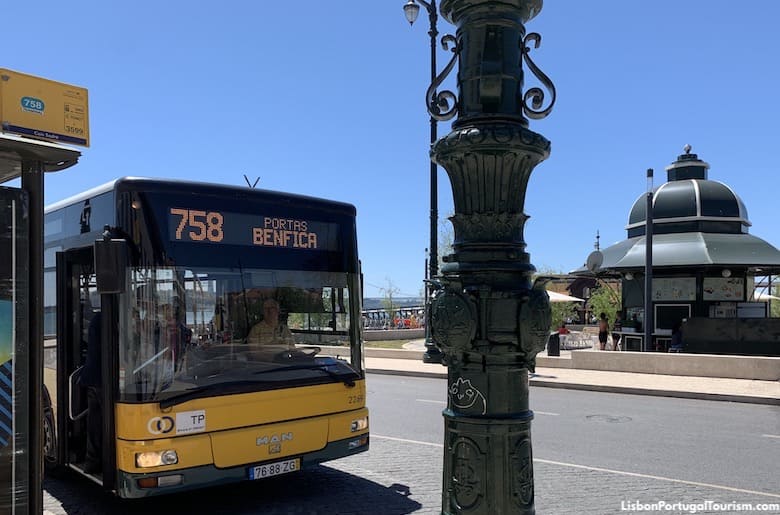 The bus 758 stop next to Cais do Sodré train station

This bus departs from Cais do Sodré Station several times within the hour, crossing the Príncipe Real district towards the Amoreiras shopping mall. From the Amoreiras stop you can also walk to the aqueduct, which is less than 10 minutes away. 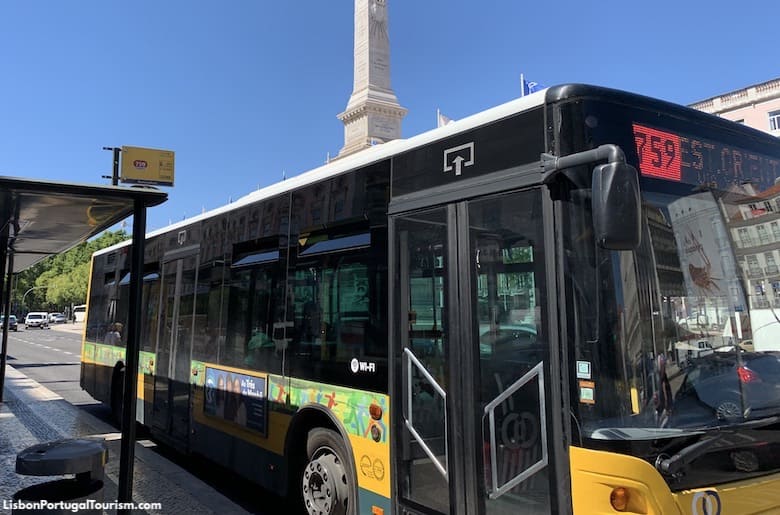 The Tile Museum is one of Lisbon's most beautiful attractions and a must see. Unfortunately, it's found outside the center, but bus 759, which departs from Restauradores Square, passing by the Santa Apolónia Station, leaves you right at its doorstep in just a few minutes (the stop is "Igreja Madre Deus (Museu Azulejo)"). 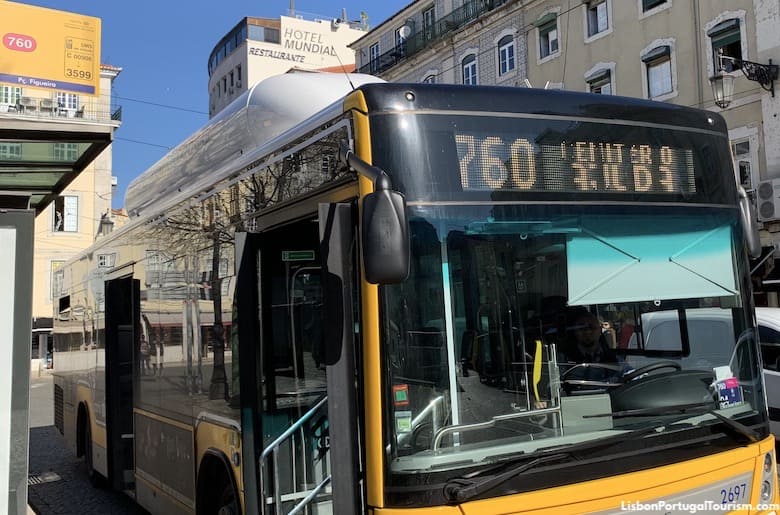 The 760 stop on the eastern side of Praça da Figueira

Those who wish to visit the Ajuda Palace should take this bus. It stops at two of the main squares downtown (Praça da Figueira and Praça do Comércio), and then goes through Cais do Sodré and Santos. It also passes by Lx Factory (stop: "Calvário"). 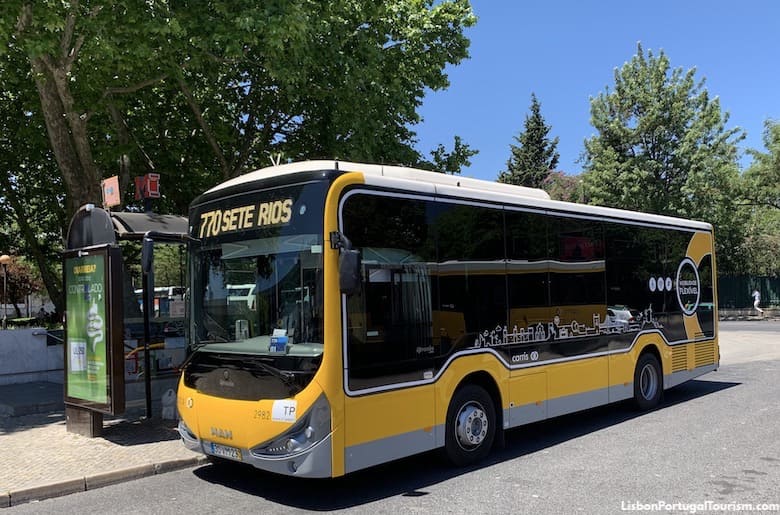 The 770 stop outside the Jardim Zoológico metro station

It's not in service on Sundays and public holidays, but this bus is the only way to reach the beautiful Fronteira Palace (besides a taxi). It departs from Sete Rios, by one of the exits of the Jardim Zoológico metro station (follow the signs pointing in the direction of Estrada de Benfica and Rua das Furnas as you exit the station).

How Much is the Bus in Lisbon?


Regular bus fare in Lisbon is €2.00. That’s for tickets bought onboard, from the driver. All rides within Lisbon (except on the airport bus AeroBus) are free with the Lisboa Card. If you have a charged public transportation card (the “Zapping” charge on the “Viva Viagem” card), you’re deducted €1.35 for each bus journey.
For more details about Lisbon’s transportation cards, look here: Lisbon Transportation Guide