Guide to the tram from the center of Lisbon to Belém, including map with the stops, schedule and ticket information 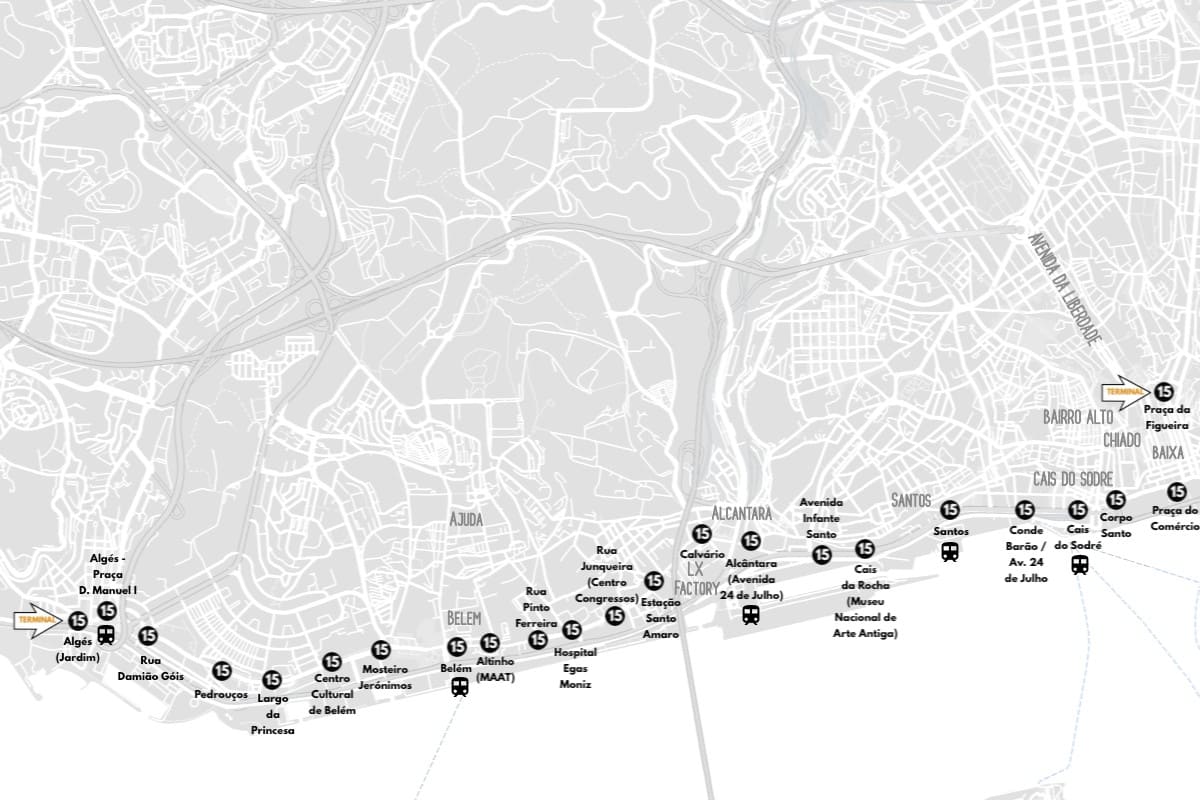 Tram 15 connects the center of Lisbon to Algés, a suburb to the west. Before it reaches its final destination, it makes stops in Belém, the last neighborhood in Lisbon before the seaside suburbs. It’s the city’s second-most popular tram after the famous 28, as Belém has many of the top tourist attractions.

It departs from Praça da Figueira, makes a stop in Praça do Comércio, and goes through the waterfront, before reaching Belém, about 30 minutes later (sometimes more, depending on traffic). For a higher chance of getting a seat, board at the Praça da Figueira stop. 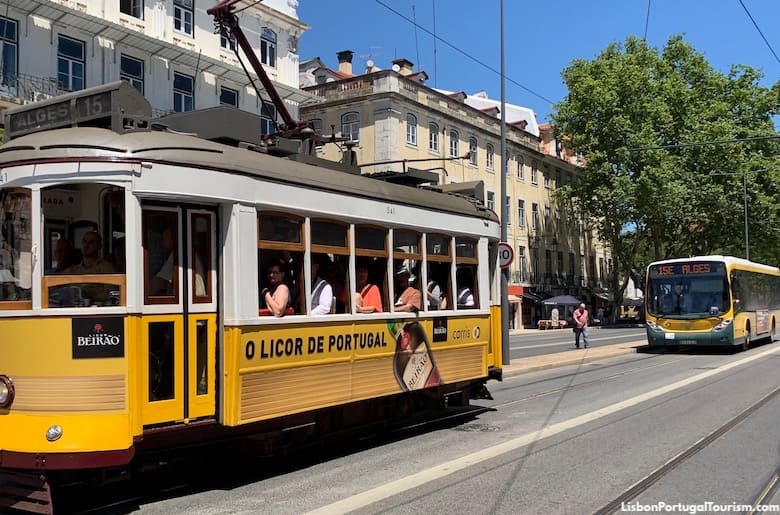 Although the small, classic/vintage trams are occasionally used on this route, the 15 mostly uses the modern trams. All the stops display the regular schedules, and have a sign with “15E” (“E” stands for “elétrico”/tram). Some also have digital information boards showing the time remaining for the next tram.


Tram 15 operates from 6am to 1am, with departures every 12 minutes. After Praça da Figueira, the main stops are Praça do Comércio, Cais do Sodré (right in front of the train station), "Calvário" (for the Lx Factory and Docas de Santo Amaro), "Belém" (by the Coaches Museum) and "Mosteiro Jerónimos" (the monastery and Discoveries Monument).

Alternatives to Tram 15 to Belém


Although tram 15 is usually the most recommended way to reach Belém from central Lisbon, it’s most often way too crowded and is slower than the train departing from Cais do Sodré station. The train departs every 20 minutes, and takes just 7 minutes to reach Belém. The train is the best way to reach Belém from the center of Lisbon. Here's the complete guide: Train to Belém
Another alternative to the tram is bus 728, which originates in the suburb of Portela, but goes through central Lisbon, and stops in Belém before reaching its final destination in Restelo. It can be caught at the Cais do Sodré stop outside the train station, from where it’s about 15 to 20 minutes to Belém.


A single ticket on tram 15 is €3.00. It can’t be purchased from the driver, it must be acquired from the onboard ticket machines. Unfortunately those machines only accept coins and don’t provide change. The crowded and lurching tram also makes this ticket-buying process something of a hassle. As a result, it’s advised that those planning to ride this tram, buy the Viva Viagem travel card at a metro station. The Rossio metro station can be accessed from Praça da Figueira, the departure point of tram 15. Better yet, it’s recommended that tourists get the Lisboa Card, which offers free rides on the city’s public transportation network, including tram 15.
The Viva Viagem card costs €0.50, and can be charged with different trips, or with the 24-hour ticket which includes unlimited rides on the trams, metro and buses. That 24-hour ticket is €6.45, and since the total cost of tickets from the onboard machines to go to and return from Belém is €6.00, it can be a good deal if you use other public transportation in a 24-hour period. It also saves the trouble of buying tickets onboard. The Lisboa Card is an even better option because it can be purchased for 24-, 48-, or 72-hour periods (and includes free or reduced admission to most of the tourist attractions).


Tourists should be aware that this tram is a favorite target of pickpockets. It’s advised that you always carry backpacks in the front, place your wallet in the front pocket, and cover it with your hand if you are standing. Try to avoid standing by the doors, as a common trick is to snatch a wallet as doors are closing. Don't think you can spot a pickpocket -- the majority is not Portuguese and often looks or dresses like tourists, using maps and jackets to cover their hands. Always use common sense and take precautions as you would in any other popular tourist destination.