Home > What to See and Do > Ajuda Palace 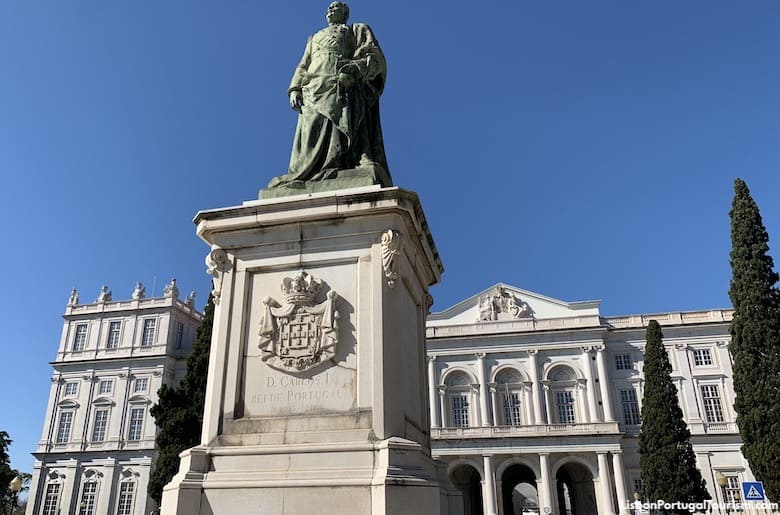 Ajuda Palace, the last residence of the Portuguese royal family.

Built in 1795, this was Portugal’s last royal palace. When the royal residence in what is now Praça do Comércio on the waterfront was completely destroyed by an earthquake in 1755, the king decided that it was safer to live up on a hill. The chosen location was Ajuda, just above Belém, which had been less affected by the disaster. 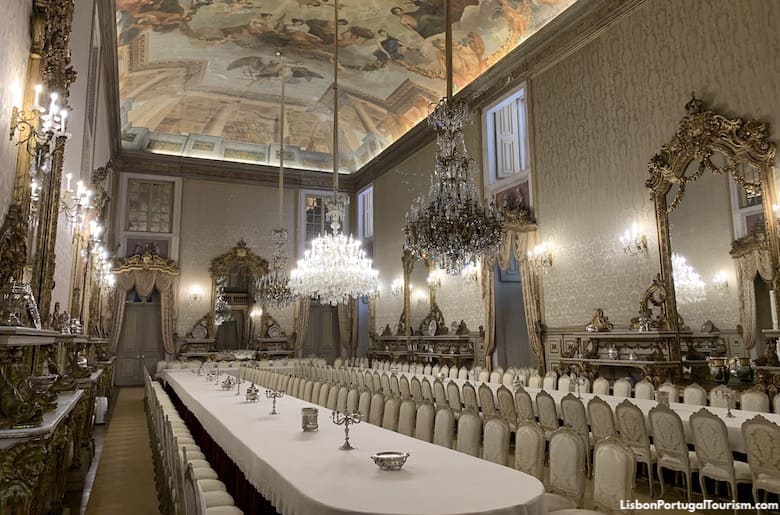 It was meant to be one of the largest palaces in Europe and the world, with gardens cascading down to the river, but only about one fifth of the original project was completed. When Napoleon’s army invaded Portugal in 1807, the royal family fled to Brazil (and actually reigned from the colony for several years), so the construction was interrupted. By the time the royals returned, many prefered that the country become a republic, which ended up happening in 1910. That meant that the royal palace was no longer royal, so the neoclassical building was left unfinished and turned into a museum. It also occasionally hosts official ceremonies, but is generally open to the public. 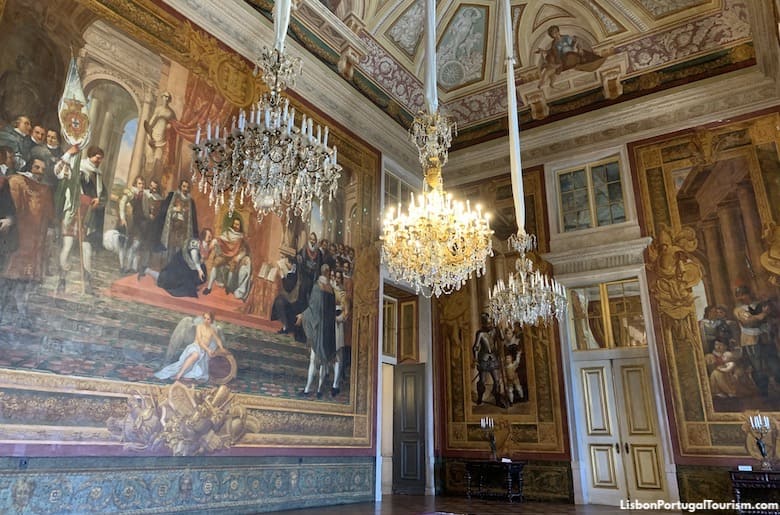 It has quite a sumptuous interior, with an ostentatious décor in several magnificent rooms. The highlights are the Audience Room (decorated with pieces from the 15th to the early 20th centuries), the Throne Room (with a ceiling painted in 1825 representing a temple opening to Heaven), the Banquet Room (where official dinners are still often held), and the King João IV Room (completely covered with paintings added in 1823, including a ceiling by Domingos Sequeira, one of Portugal’s leading artists of that period). The rooms include a remarkable collection of clocks, and a dinner service that’s one of the few in Europe that remains completely intact. 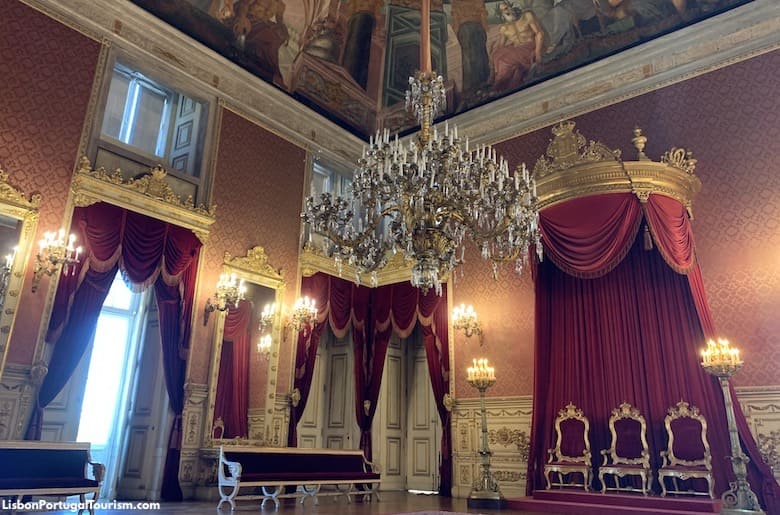 The Throne Room is one of the highlights of the interior

In the chapel is an El Greco painting, depicting the “Holy Face” of Christ. 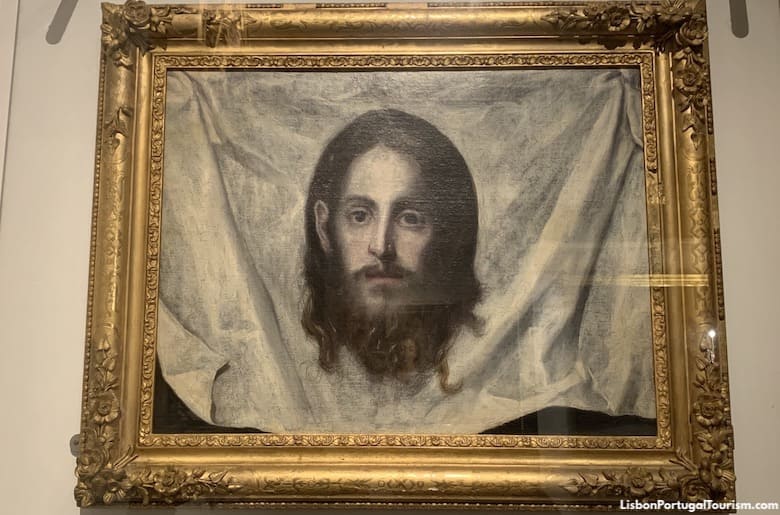 An El Greco painting hangs in the palace's chapel

By the entrance is a number of neoclassical sculptures, while in front of the building is a statue of Carlos I, the last king to live in the palace. 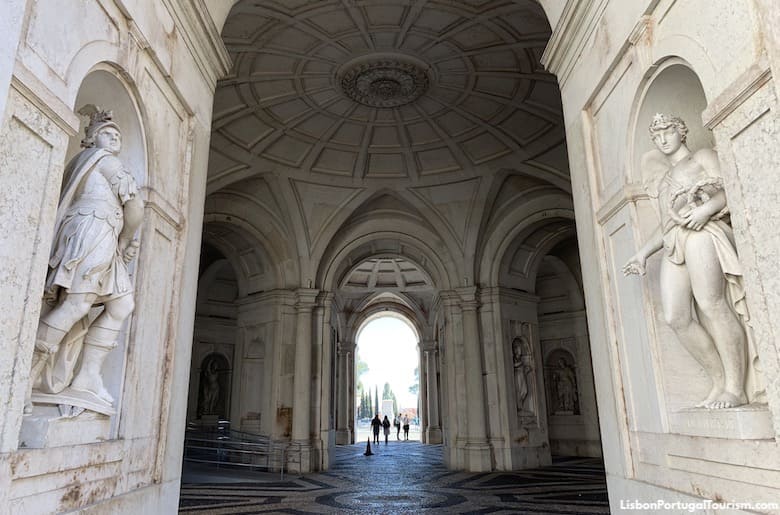 The western wing, which was in ruins, was completed in 2021 in contemporary style to house the Royal Treasure Museum. After an investment of 31 million euros, it opened to the public in June 2022, displaying the precious crown jewels of great artistic, historic and cultural significance. 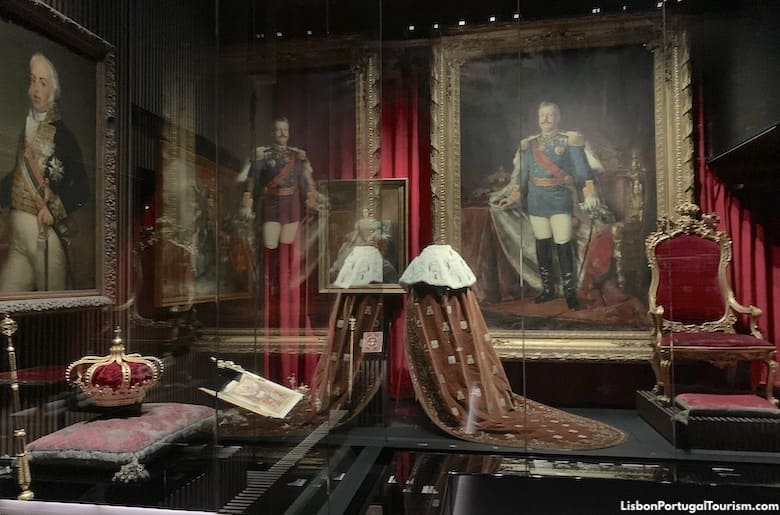 There are over 1000 pieces, spread over 11 small sections, on three levels. The highlights are what is said to be the world's second biggest gold nugget, a magnificent dinner set by famed silversmith François-Thomas Germain, a diamond-covered badge from 1790 or 1800, and golden roses offered by Pope Gregory XVI in 1842. 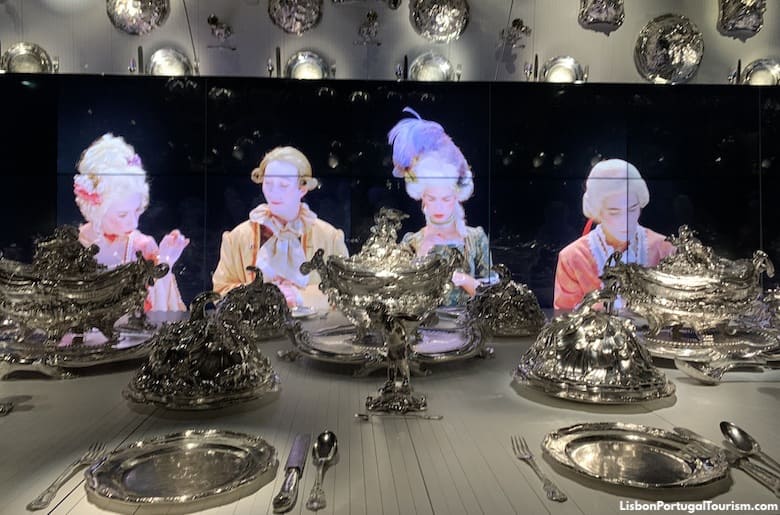 The François-Thomas Germain dinner set in the Royal Treasure Museum

A few steps across the street is the Royal Botanical Garden of Ajuda, laid out in 1768. It was Portugal’s first botanical garden, and while it has since lost a great number of its 5000 species of plants (due to the French invasion in 1808 and a tornado in 1941), a restoration in 1993 tried to recreate the original garden. 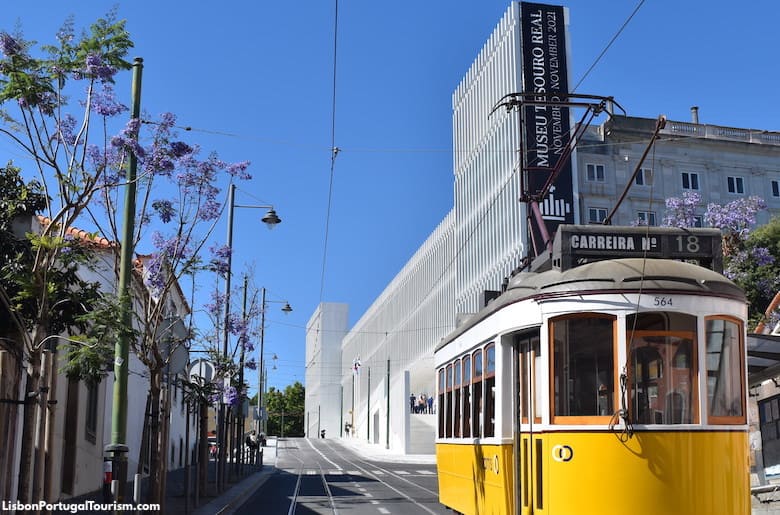 Tram 18 stops by the modern wing of the palace, with the Royal Treasure Museum.

Today, it’s a wonderful place to relax after a visit to the palace, in the company of roaming peacocks. From its two levels is a view of the river and 25 de Abril Bridge, and there's the shade of several tropical trees. Some of those trees and plants are hundreds of years old, and surround a beautiful 18th-century fountain adorned with mythological figures, serpents, fish, and seahorses.
The garden can be visited independently from the palace and requires a separate ticket.

The Royal Botanical Garden, down the road from the palace.

How to Get to Ajuda Palace


You should take the train from Cais do Sodré to Belém (it departs every 20 minutes and takes just 7 minutes to reach Belém), and then walk up Calçada da Ajuda, across from the Coaches Museum. It takes about 15 minutes to walk up the long, sloping street lined with jacarandas to the palace.
Tram 18, which departs from outside the Cais do Sodré train station stops by the palace, but zigzags up the hill, with the journey taking about 25 minutes to a half hour. Bus 760 stops right in front of the palace, but it also takes about 30 minutes from its stop downtown, in Praça da Figueira. Bus 732 also takes about a half hour, and stops by the botanical garden, a few feet from the palace.
You may also take bus 714 or tram 15 to Belém, both departing from Praça da Figueira, but those are usually too crowded and therefore uncomfortable, and are slower than the train.
You may ride the train, trams and buses for free with the Lisboa Card.


Admission and Tickets to Ajuda Palace

The palace is closed on Thursdays but the Royal Treasure Museum opens every day.


In addition to the botanical garden, you should visit the Coaches Museum, down the hill from the palace, which houses a unique collection of royal coaches.