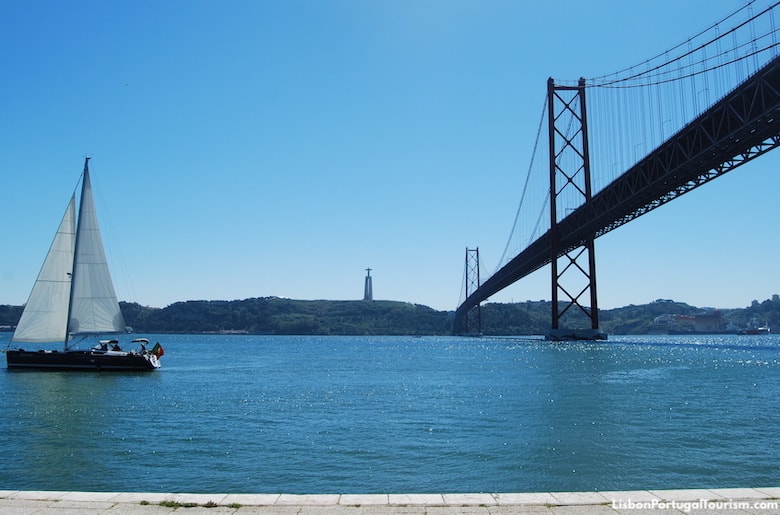 Originally named after Prime Minister (and dictator) Salazar when it was inaugurated in 1966, this bridge changed its name after the 1974 revolution that happened on April 25th. While it may look like the Golden Gate in San Francisco (it was in fact built by an American company), it was actually inspired by the Bay Bridge in the same city. 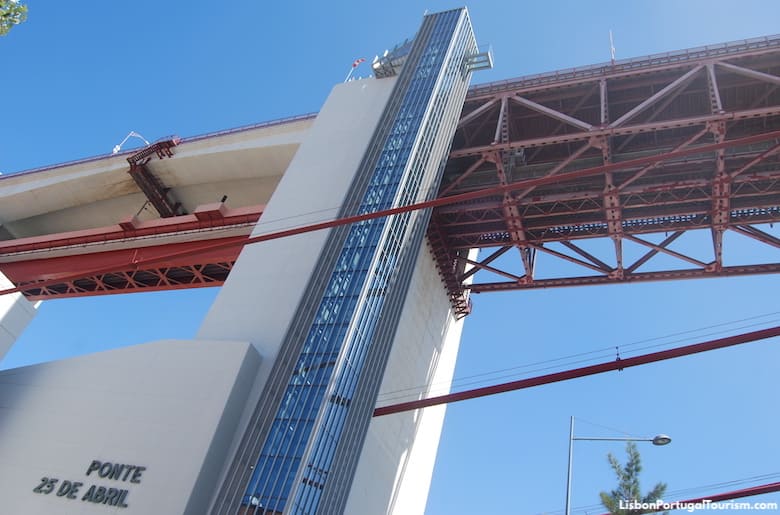 The elevator that takes visitors to the top of the bridge

Its central span is longer than that of the Golden Gate, and it links Lisbon to the beaches of Costa da Caparica and to the south of the country. One of the fourteen pillars (“Pilar 7”) houses an exhibition documenting the bridge’s construction process, and it’s possible to see the mechanisms that make a suspension bridge work. The highlight, however, is taking an elevator to a glassed observation deck at the top, for a view directly above the river and over the city. 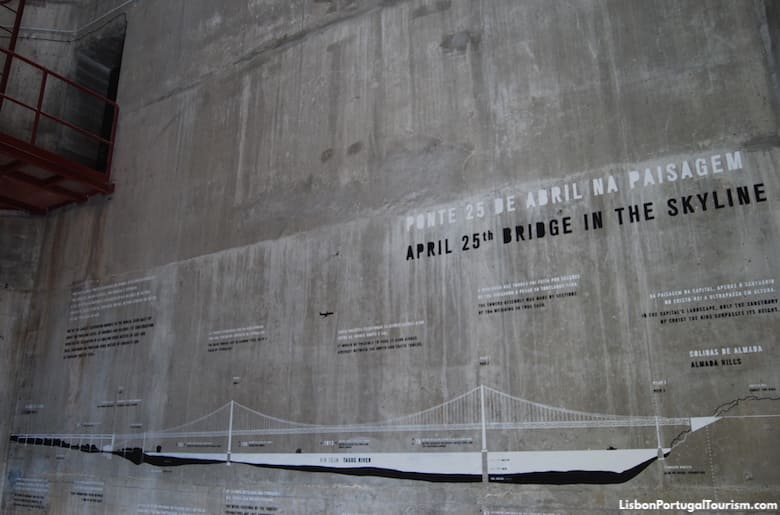 The exhibition inside Pilar 7

For the best views of the bridge, walk down the road to Rua de Cascais, where you find an underpass to cross to the Alcântara-Mar train station, and from there it’s just a few steps to the docks of Santo Amaro. The former warehouses of the docks are right below the bridge and are now restaurants and bars. Here you can take some of the best photos of the bridge and walk along the waterfront all the way to the monuments of Belém (it’s about a 15-to-20-minute walk). 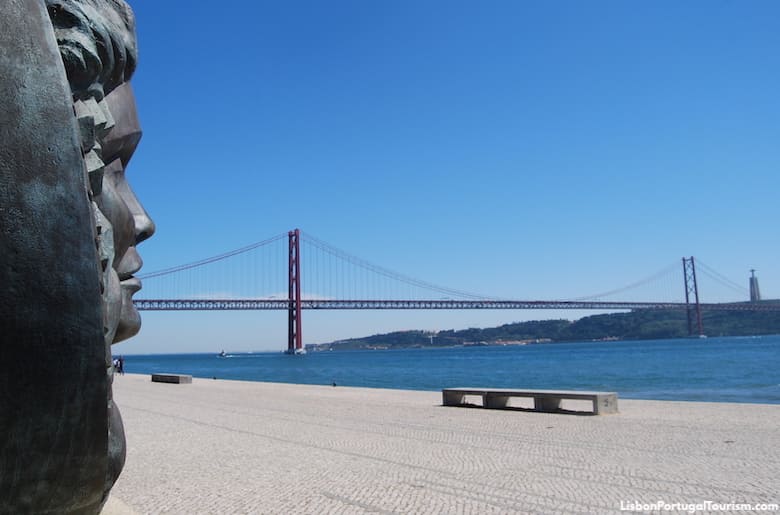 For photos over the bridge, visit the Cristo Rei monument across the river. A sightseeing cruise is another opportunity to see it up close, by going under it. 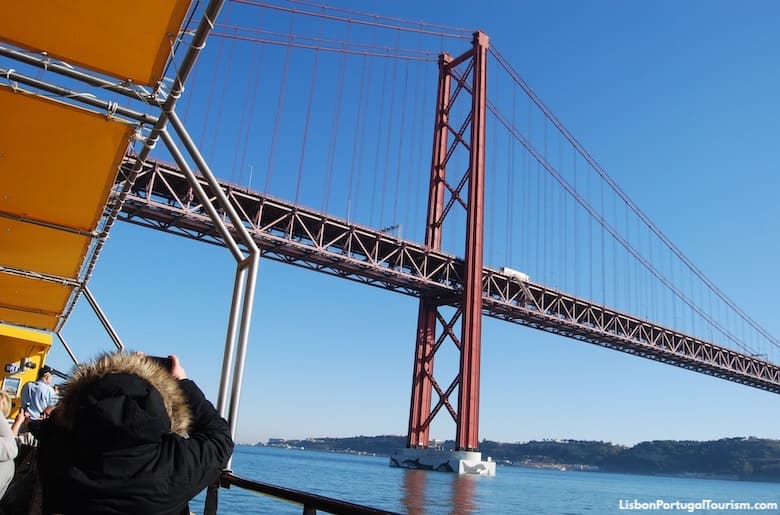 Other spots for good views of the bridge are the top of the MAAT, the terrace of Santo Amaro Chapel, and the Monsanto Forest Park.

How to Get to 25 de Abril Bridge


The fastest way to reach Pilar 7 is taking the train that goes to Cascais, which departs every 20 minutes from Cais do Sodré Station. It stops in Alcântara-Mar Station in just 4 minutes, and from there you can walk down Avenida da Índia to the bridge.
Bus 728, which departs from eastern Lisbon and goes through the waterfront, past Cais do Sodré Station, also has a stop on Avenida da Índia, across from Alcântara-Mar Station. You may ride the train and bus for free with the Lisboa Card.


Admission to the exhibition and observation deck is €6. It’s free with the Lisboa Card.
You may buy your ticket online: Skip the Line: Pilar 7 Bridge Experience Admission Ticket


As mentioned above, you may walk from the bridge to Docas de Santo Amaro, and from there to Belém, along the waterfront. The Lx Factory complex is also a few feet away.


Where to Stay by 25 de Abril Bridge 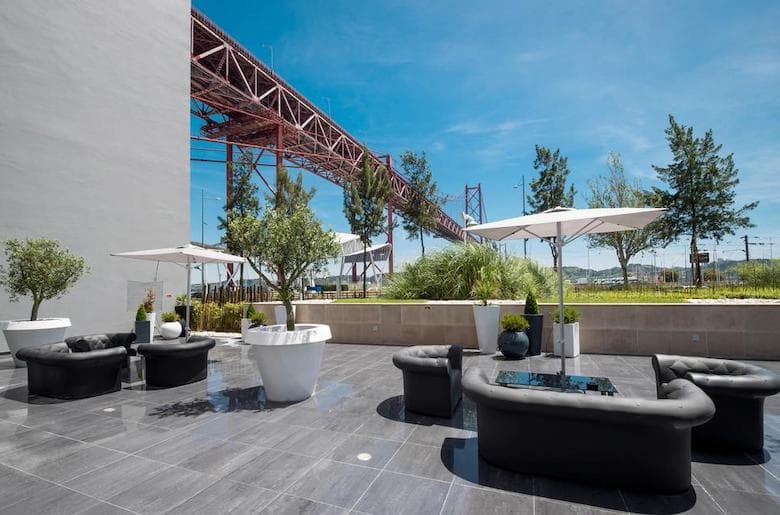 If sleeping under the bridge sounds appealing to you, you may do so at this hotel. It has a peculiar opera-themed interior, with each room named after a singer. The best part of staying here is the views of the bridge.