Where to locate the main tourist attractions and neighborhoods 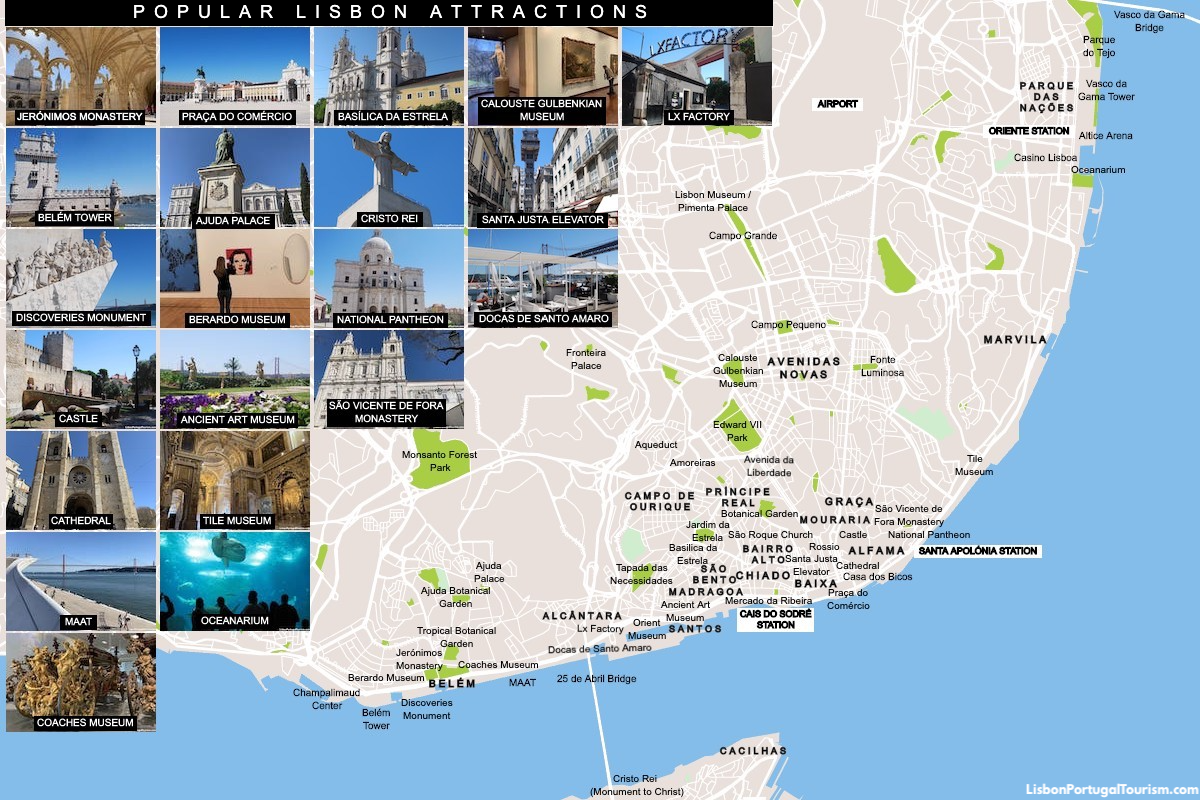 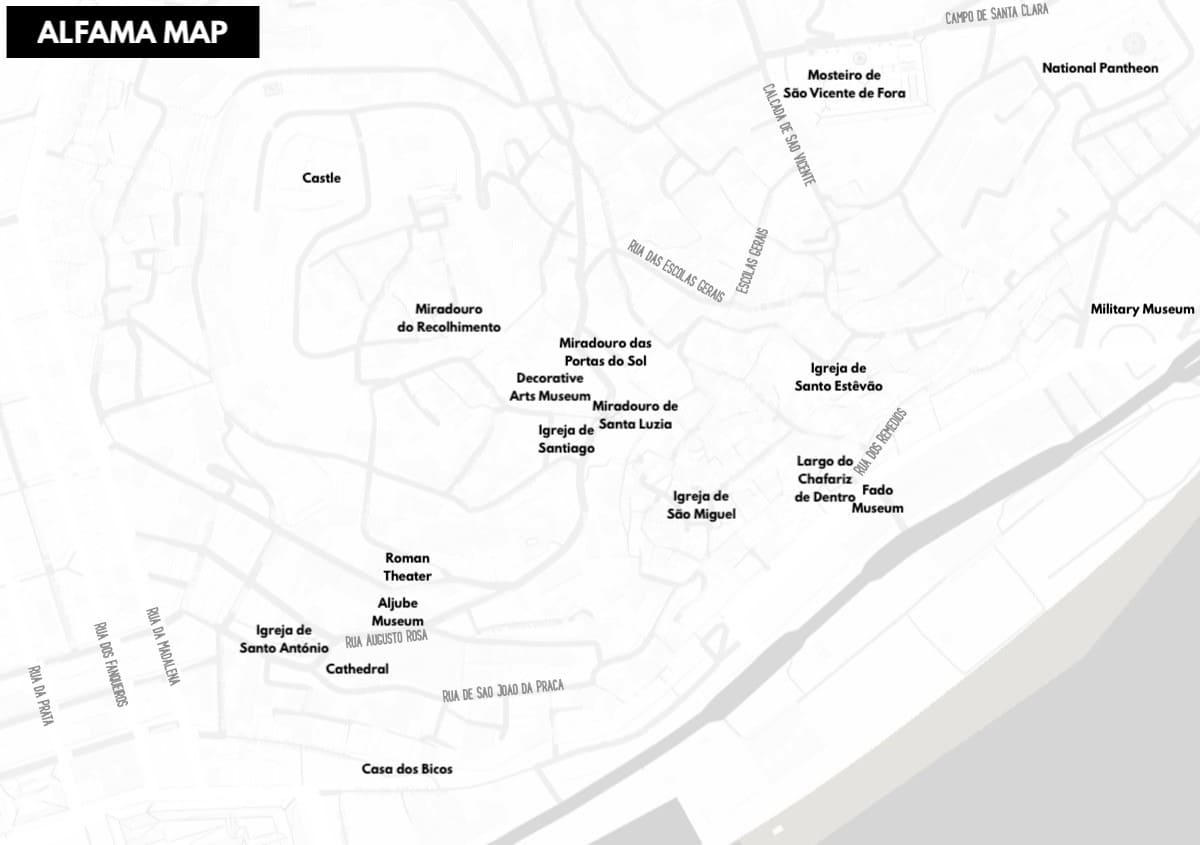 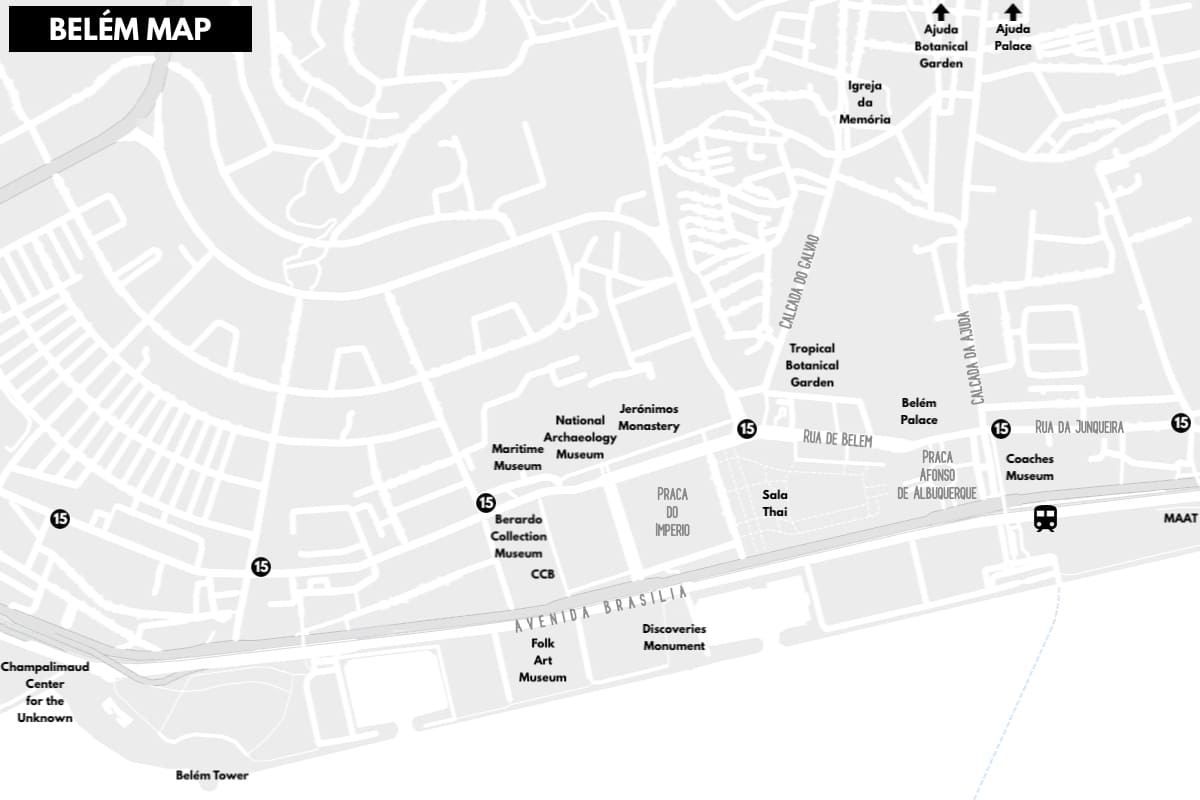 Although most tourists nowadays use their cellphone apps to locate just about anything, a tourist map is always helpful, as it gives a general idea of the location and rough distances between the main attractions. On the first map above, you can locate Lisbon’s most popular sights and major landmarks, while the second map shows the attractions of the labyrinthine Alfama district and the third helps you locate all the monuments, museums, train station and stops of tram 15 in the Belém district.

Starting in the west, in the city’s westernmost district (Belém, best reached by train), you find the largest concentration of must-see monuments and museums, including the Jerónimos Monastery, the Belém Tower, the Discoveries Monument, the Berardo Museum, the Coaches Museum, and the MAAT (the west wing of the monastery also houses the very popular Maritime Museum and the National Archaeology Museum). In this part of town you also find two of the city’s most beautiful gardens, the Tropical Botanical Garden and the Ajuda Botanical Garden. This last one is found across the road from the royal residence, Ajuda Palace.

To the east is the neighborhood of Alcântara, which stands in the shadow of 25 de Abril Bridge. Right under the bridge are the warehouses-turned-restaurants of Docas de Santo Amaro and the trendy shops and eateries of Lx Factory. Nearby is the Orient Museum and the little-visited park Tapada das Necessidades.

Then there are the neighboring districts of Madragoa and Santos, home to one of Portugal’s finest art collections, in the Ancient Art Museum. Up the hill from here is Estrela, where you find the domed Basílica da Estrela, across from one of Lisbon’s favorite parks, the Jardim da Estrela. It’s just a short walk from the neighborhood of Campo de Ourique, which is also within walking distance of the observation deck at the top of the Amoreiras Towers and of the monumental aqueduct.

Lisbon's “central park” (Edward VII Park) isn’t far, by the modern district of Avenidas Novas, which is home to the world-class Calouste Gulbenkian Museum. To the south is the city’s main boulevard (Avenida da Liberdade), which leads to downtown and the neighborhoods of the “Old Town.” To the west of Baixa’s (downtown) big squares (Rossio and Praça do Comércio) and its iconic elevator (the Santa Justa Elevator) are the historic districts of Chiado and Bairro Alto, as well as the waterfront neighborhood of Cais do Sodré, home to the city’s most popular market and food hall, Mercado da Ribeira. To the east is Alfama, topped by the castle, and home to centuries-old landmarks like the cathedral, Casa dos Bicos, São Vicente de Fora Monastery, and the National Pantheon. The picturesque streets of Mouraria and the breathtaking viewpoints of Graça are located further up the hill.

Outside the central tourist areas is the beautiful and unique Tile Museum, while further to the east is modern Lisbon, the Parque das Nações district. It’s not far from the airport, and is visited for its pleasant waterfront, with the Vasco da Gama Tower and Vasco da Gama Bridge on one end, and the spectacular Oceanarium on the other.

Back in the center, Cais do Sodré Station connects you to the attractions across the river -- the Monument to Christ and the picturesque former fishing community of Cacilhas, which offer a panoramic view of Lisbon. The same station is also the departure point to the beaches of Cascais (you may also find this Lisbon beaches map useful).

For other attractions, see the guides to each neighborhood, and check out the list of 50 things to see and do in Lisbon.

Zoom in and out on the map below to locate available hotels by Lisbon's main attractions and neighborhoods, and check prices and availability: