Home > What to See and Do > St. George's Castle 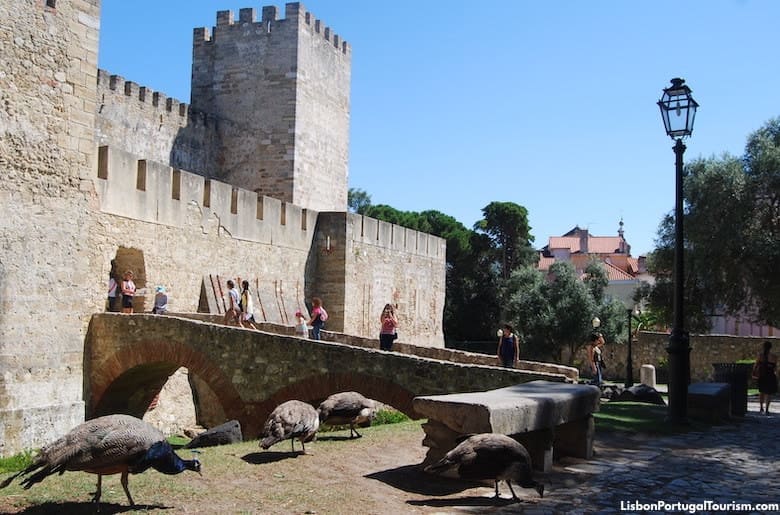 The castle and its resident peacocks

Lisbon’s tallest hill was fortified even before the Roman occupation, and the Visigoths and the Moors all left their mark. The castle you see today is the restored version of the Moorish construction, which largely collapsed in the 1755 earthquake. It was also the royal residence, before the king decided to build a palace on the waterfront, which was also completely destroyed in the earthquake. Today the castle crowns the city as the main landmark of ancient Lisbon, and offers a breathtaking view from its walls and pine-shaded terraces. 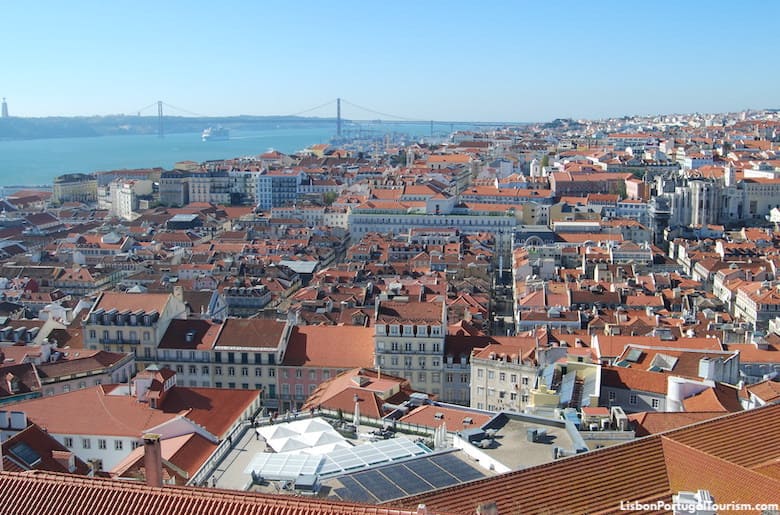 You can see all of downtown Lisbon from the castle

As you enter the main gate you see a statue of Afonso Henriques, Portugal’s first king, who conquered the city from the Moors in 1147 with the help of Northern European crusaders on their way to the Holy Land. 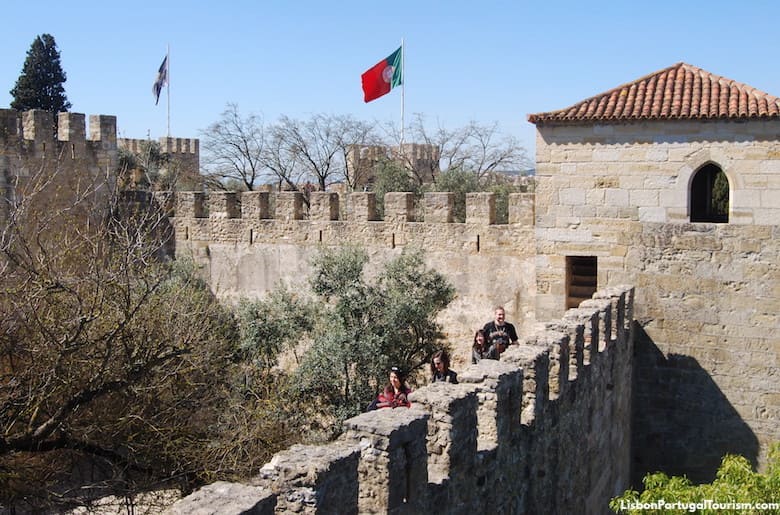 Walking around the ramparts provides plenty of photo opportunities

Over two centuries later, the castle was named after St. George, the patron saint of England, following the Anglo-Portuguese Treaty in 1373. A series of cannons pointing down at the city is a reminder of the original purpose of the site. 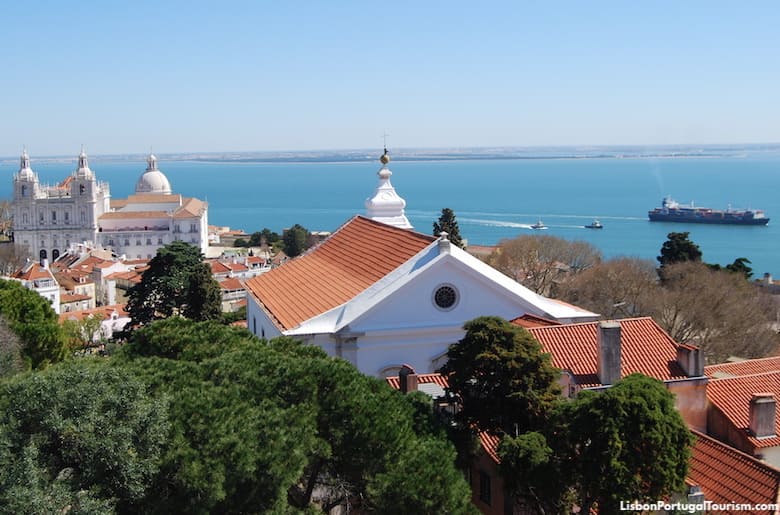 View of São Vicente de Fora Monastery, the dome of the National Pantheon, and Santa Cruz do Castelo Church

There is a total of ten towers, which may be climbed. One of them holds a camera obscura which projects images of the streets, people, and monuments in the city center. Open every half hour to only a few people at a time (from 10am to 5pm), the best part is learning how such a device works. 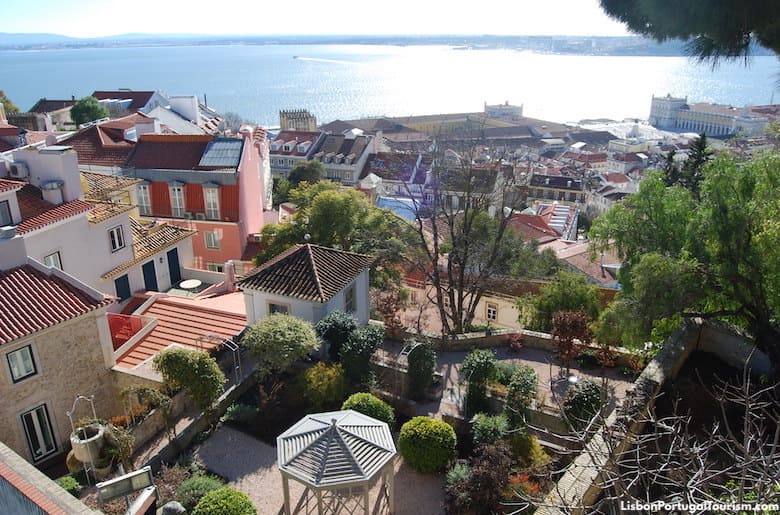 Lisbon's oldest neighborhood and Comércio Square, seen from the castle

In what remains of the medieval palace where explorer Vasco da Gama was welcomed by the king in 1499 after his epic voyage to India, is a small archaeological museum and a restaurant. Most of what is on display in the museum was found in excavations around the castle and in the neighborhood, and includes Moorish coins, pottery and tiles. Touch screens tell the story of life around the castle hill over the centuries. 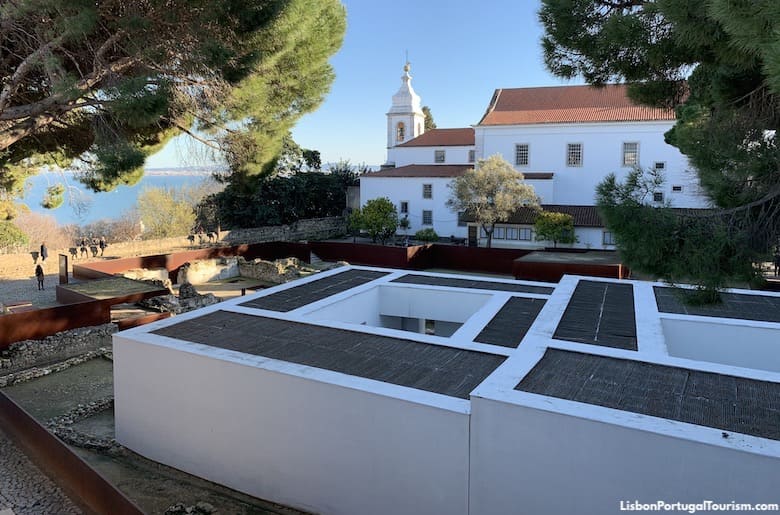 The archaeological site with recreations of the homes from the Moorish occupation, and the Church of Santa Cruz do Castelo

The landscaped area surrounding the towers is home to a number of peacocks, which delight tourists when they display their colorful plumage. Behind it is an archaeological site with traces of dwellings from prehistoric times to the Moorish period. White contemporary structures recreate what the typical homes looked like. 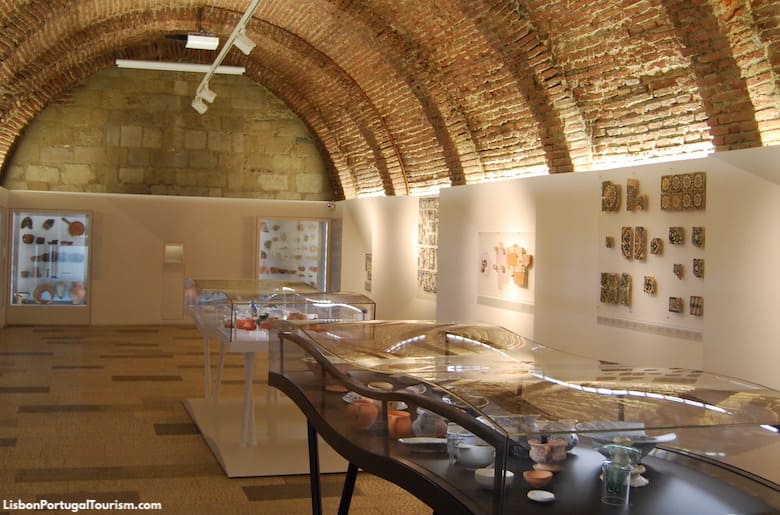 Within the castle walls is a tiny pedestrianized neighborhood simply known as “Castelo” (“Castle”), but it’s officially called Santa Cruz do Castelo. It only has a few narrow, cobbled lanes and pretty streets, but it’s highly recommended that you go for a walk around. Rua das Flores de Santa Cruz is particularly picturesque, and it leads to the Church of Santa Cruz do Castelo, which allows visitors to climb up to the bell towers for views of the surroundings. 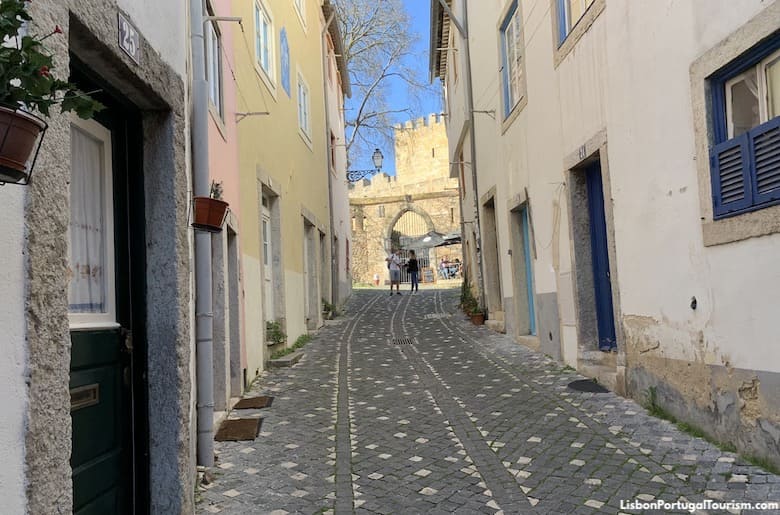 Rua do Espírito Santo, one of the picturesque streets around the castle

On your way there, you may encounter the peacocks going for a stroll from the castle, and end up discovering picturesque corners that even guidebooks don’t tell you about. One of them is the Recolhimento viewpoint, a landscaped terrace used as a playground for the local children and with olive trees providing shade to tourists who take photos of the beautiful panorama over old Alfama. It’s hidden behind a group of houses, but it’s easy to find if you go down Rua do Recolhimento around the corner from the castle’s ticket office, and then turn on Beco do Recolhimento (it’s only open during the day -- the gate opens at 10am and closes at 7pm in the summer and at 6pm in winter). 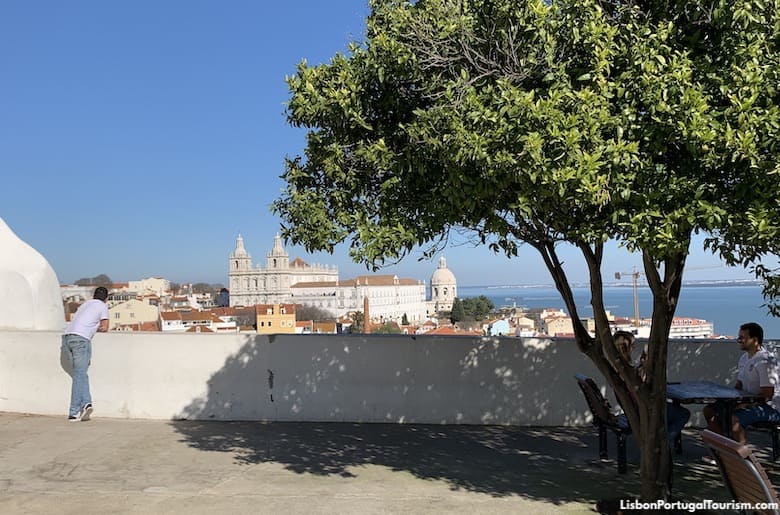 The Recolhimento viewpoint by the castle

How to Get to Lisbon's Castle


The castle is a pleasant walk from downtown, if you follow the tram tracks up the hill, past the cathedral. If you want to save your legs, take bus 737 that departs from Praça da Figueira and ends right by the gate. Trams 28 and 12 also pass nearby.
There are also a couple of free public elevators that link downtown to the castle hill. The first one is on number 178 of Rua dos Fanqueiros, and goes up to Rua da Madalena, where you turn the corner to Largo Chão do Loureiro and take another elevator to Costa do Castelo, a street that leads up to the castle.
You may ride the bus and trams for free with the Lisboa Card.


Admission and Tickets to Lisbon's Castle


General admission is €10. It’s €5 for those between the ages of 13 and 25, and €8.50 for those over the age of 65 (ID required). The castle is one of only three major attractions (the others are the cathedral and the Monastery of St. Vincent) that are not included in the Lisboa Card.
You may save time by skipping the long lines when you buy your ticket online: Skip the Line: Ticket to Castelo de São Jorge


Just down the hill from the castle are two of the city's most beautiful viewpoints (Portas do Sol and Santa Luzia), and the Decorative Arts Museum.


Where to Stay by the Castle 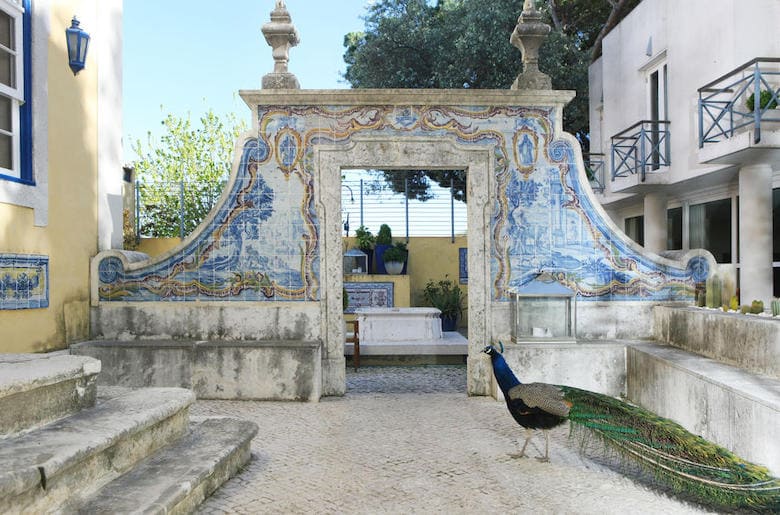 There are several romantic hotels in Lisbon, but none can offer the fairytale atmosphere of this one inside the castle. It’s the monument’s former kitchens, dating back to the 1700s, and features a very authentically Lisbon design, with baroque tile panels and traditional designs on the cobbled pavement. A number of Phoenician, Roman, and Moorish artifacts were found during the building’s renovation, and are now on display. There are just fourteen rooms, each individually styled, mixing a classic and contemporary design. When you step out to the patio, don’t be surprised if you have the castle’s peacocks for company. 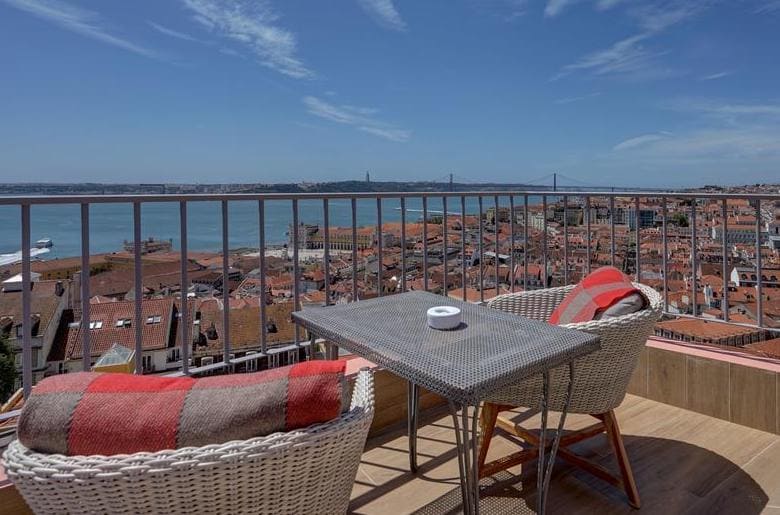 Found just a few steps down the hill from the castle, this intimate and romantic hotel offers some of the best views of Lisbon. There are just over a dozen rooms, each with their own pieces of art, created by the owner and other artists. It doesn’t have a restaurant, but breakfast is served outside on a patio (you may also choose to have it in the room). 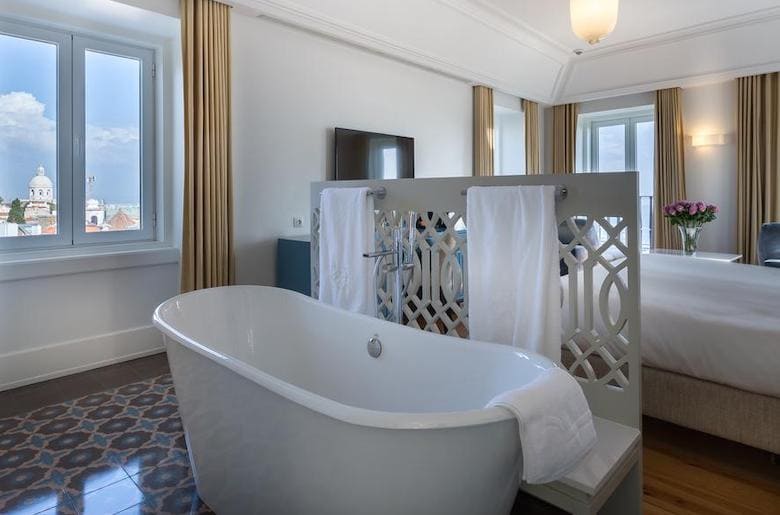 A 15th-century palace which was later turned into a factory is now a romantic hotel. Located between the castle and two of Lisbon’s most beautiful viewpoints, it’s divided into 19 unique rooms, some with garden views, and others looking over the Alfama district. Its restaurant with outdoor seating is a great spot to start or end the day