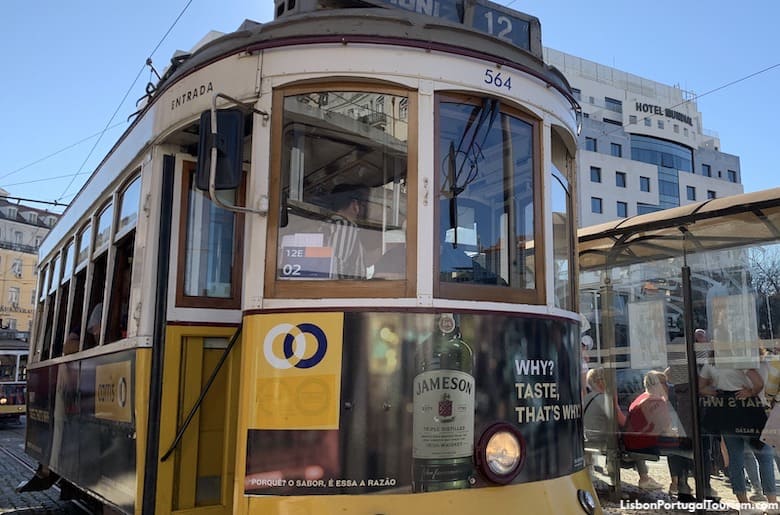 Tram 12 takes a circular route that goes from below the neighborhood of Mouraria up the hill to the castle, and back. It departs from and terminates at Martim Moniz, a large square within walking distance of the main squares of Baixa (downtown).

Its route is the shortest of all of Lisbon’s trams, and is an alternative to tram 28, which also departs from and terminates at the same square. It’s mostly used by those who live in the Graça district up the hill, and by tourists who just want to have the experience of riding an old tram and stop at the castle. Although the 12 is never mentioned in guidebooks, it’s now Lisbon’s third-most popular tram, simply because most tourists find the 28 too crowded.

While it may not be the fastest way to climb up the castle hill and there are better alternatives to reach Lisbon’s oldest monument, there’s still no better way to navigate the narrow hills, steep inclines and sharp corners of this hill.

From its starting point in Martim Moniz, tram 12 reaches Miradouro das Portas do Sol in 10 minutes. That’s one of the city’s most beautiful viewpoints, and a short walk from St. George’s Castle. From there, the tram goes past Miradouro de Santa Luzia, the cathedral, and St. Anthony Church, before passing by Praça da Figueira (one of downtown’s main squares), and ending back in Martim Moniz.

As you should do in any popular tourist destination, watch out for pickpockets in Lisbon’s trams. A way to avoid losing your wallet is keeping it in your front pocket, and, if standing, cover that pocket with your hand. Remember: you can’t tell who’s a pickpocket, as most are Eastern Europeans and look like tourists (some even carry maps and cameras). 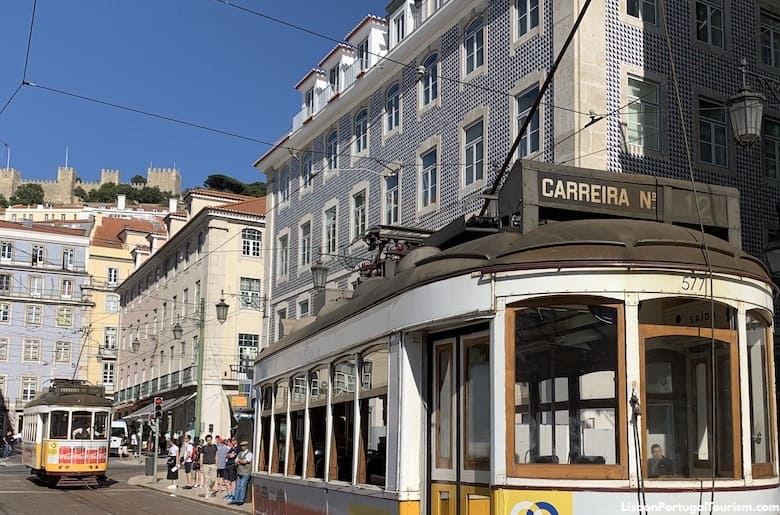 Tram 12 at its stop in Praça da Figueira


Tickets are purchased from the driver, and are €3.00 for a single journey. Those with the Lisboa Card travel for free. The trams are more expensive than the city’s buses and metro, in order to discourage passengers from buying tickets from the driver, which causes delays. Local commuters mostly use their monthly passes, and most tourists know that the Lisboa Card is an excellent deal (as it also offers free admission to the major tourist attractions). An alternative to the Lisboa Card is the Viva Viagem card, the prepaid public transport card. With it, a tram journey is just €1.50, and there’s also a 24-hour Viva Viagem card costing €6.45 for unlimited rides on the trams, buses, and metro. The Viva Viagem can be bought from any metro station (from the machines or ticket counters).
These cards must be validated upon entering the tram (through the front door), by scanning them on the machine behind the driver.