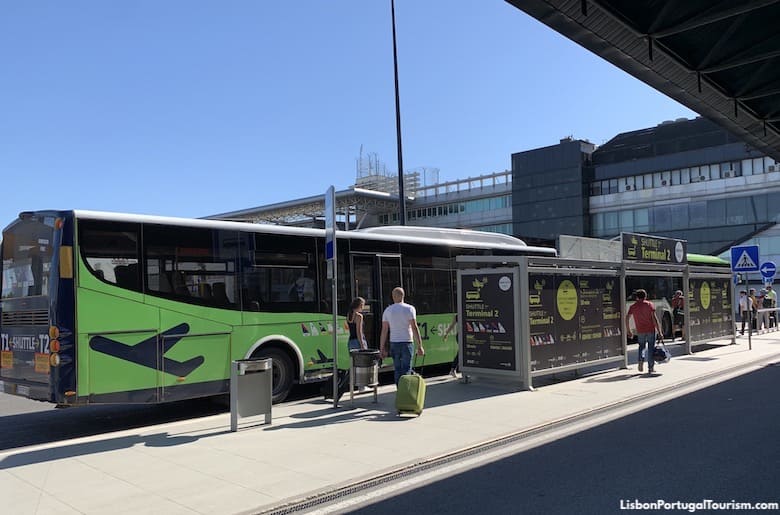 Lisbon Airport’s terminal 2 is used for the departures of low-cost airlines (all flights arrive at terminal 1). If you’re flying on EasyJet, Ryanair, Transavia, Norwegian, Wizz Air, or Blue Air, you’ll depart from this terminal. It’s not connected to the city’s public transportation (the metro or buses), so you either go there directly by taxi or take the free shuttle bus from terminal 1.

The shuttle departs from outside the departures hall of terminal 1 every 10 minutes throughout the day (except for the 2-hour period between 1:30am and 3:30am), and takes about 3 minutes. The route between the two terminals is not walkable. If you are going to the airport from the city center by metro, enter the airport out of the metro station (this is the arrivals hall), and turn left to the escalators which lead to the departures hall of terminal 1. Outside is the clearly-signed stop for the shuttle bus to terminal 2 (pictured above).

If you arrive on a flight and need to connect to another departing from terminal 2, you may need to collect your bags before switching terminals. You may also need to pass through immigration, and will have to go through another security screening.

It’s advised that all travelers leave sufficient time for connections, and for any flight departing from terminal 2 it’s recommended that you arrive at the airport some extra time in advance.

As the low-cost terminal, terminal 2 has basic facilities and just two large rooms -- one for checking in, and another for the waiting area. Eating and shopping options are very limited, so most of the time will be spent sitting or standing. Fortunately, it offers free wifi and outlets to charge phones.