Home > What to See and Do > São Roque Church and Museum 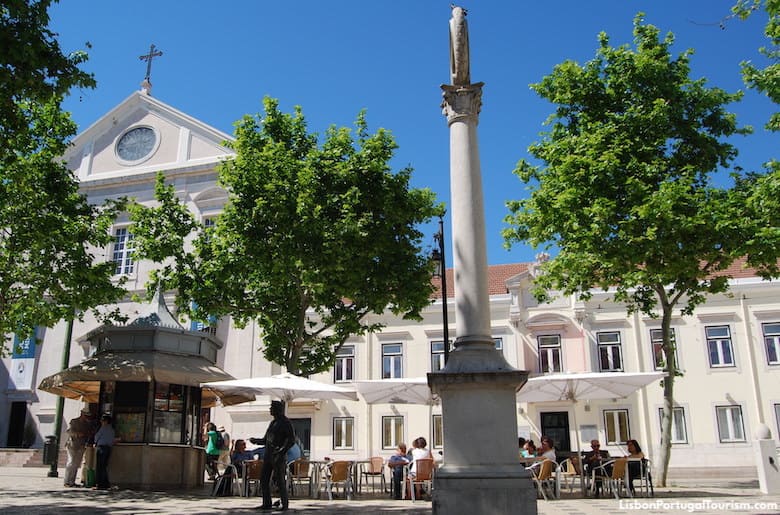 The plain façade of the church and museum of São Roque (St. Roch)

Lisbon’s richest church has the city’s plainest façade. Dedicated to St. Roch, it was built by the Jesuits between 1553 and 1573, but remained without a roof until 1582. That’s because it was meant to have a vaulted ceiling, but it was decided that it would be flat and made of Prussian timber instead. That’s the ceiling you see today, with faded paintings. 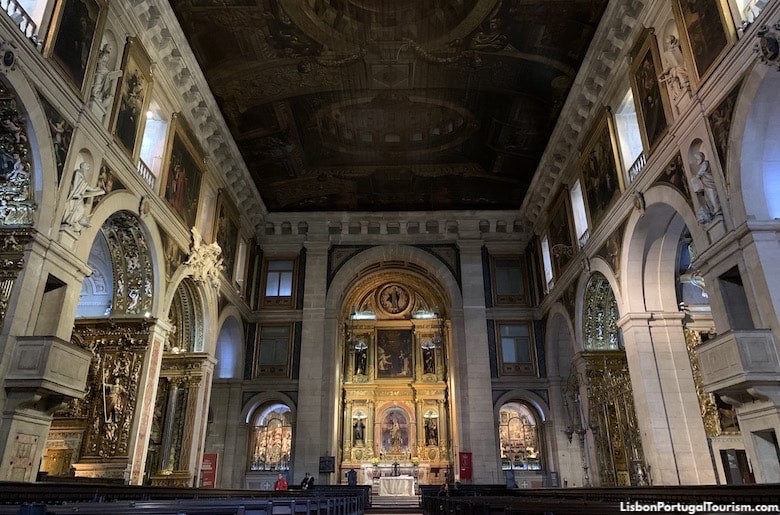 The interior of São Roque Church

Below it is a number of magnificent chapels, including the one that’s often described as the “world’s most expensive.” That’s the lavish Chapel of St. John the Baptist (the fourth one on the left as you enter), an extraordinary masterpiece of European art, ordered from Rome by the Portuguese king in 1742. It took five years to complete, and its precious materials were then transported to Lisbon on three ships. It’s made up of gold, ivory, lapis lazuli and agate, and what look like paintings are actually mosaics. 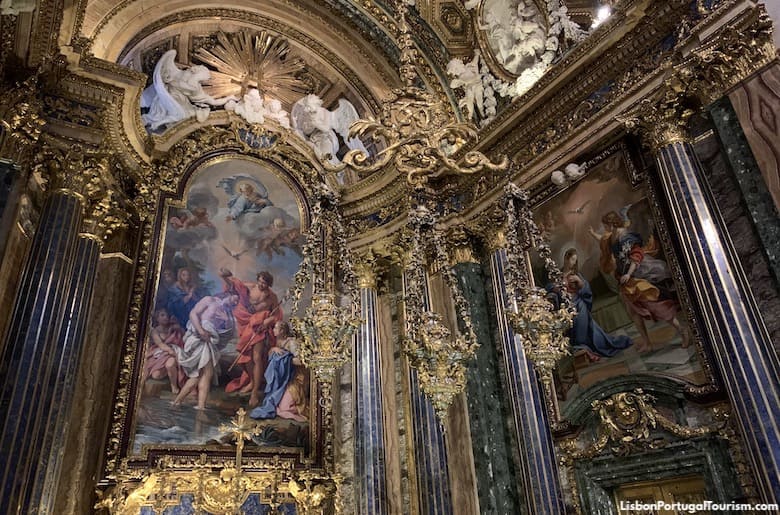 The lavish Chapel of St. John the Baptist, "the world's most expensive chapel"

Other chapels are decorated with polychrome marble and remarkable works of gilded woodcarving, most notably the gold-covered Chapel of Our Lady of Doctrine.

Also worth a closer look is the Chapel of St. Roch, which features what’s been considered the world’s 16th-century tile art masterpiece. Completed in 1584 by the master Francisco de Matos, it stands out for the quality of the paintings on a yellow background, representing a “Miracle of St. Roch,” in a technical perfection usually only found in oil painting. 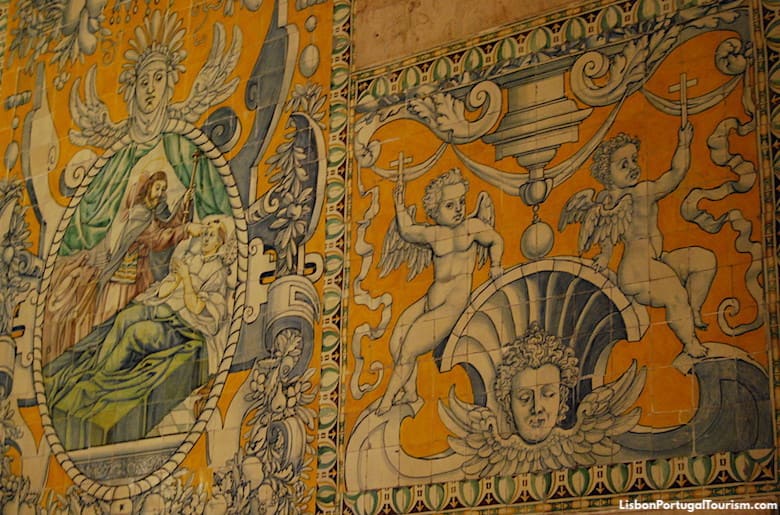 16th-century tile art masterpiece on the Chapel of St. Roch

The adjoining museum displays one of the world’s most important Roman sacred art collections. It includes sculptures, paintings, and relics that are unique in the world, plus jewelry and Flemish tapestry. It’s recommended that you join one of the multilingual guided tours, offered at no extra cost. 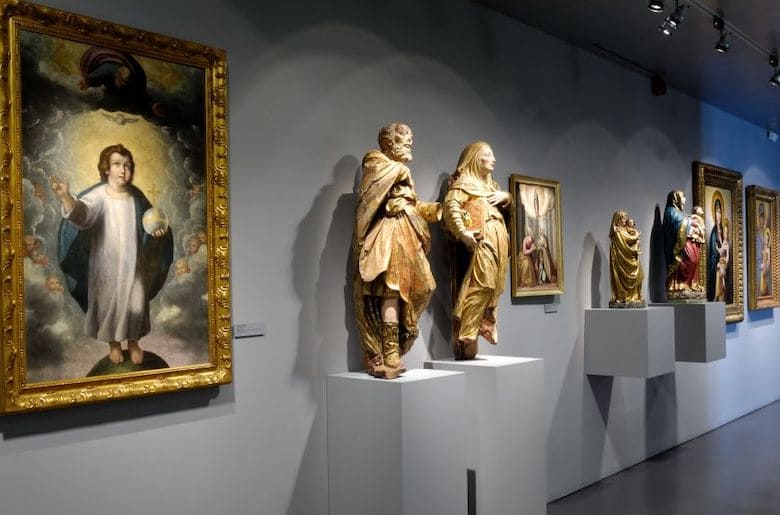 The museum connected to the church


Outside is a controversial and politically-incorrect statue of António Vieira, a 17th-century Portuguese Jesuit priest and writer who moved to Brazil, with the mission of converting the natives to Christianity. He fought against their enslavement, and is celebrated for it today, but there have been protests against this statue erected in 2017, which is interpreted by some as a glorification of European and Christian supremacy, as the priest is shown holding up the cross, as young naked natives surround him at his feet.

How to Get to São Roque Church and Museum


You may walk up to the church from anywhere in the Chiado or Bairro Alto districts, or take bus 758 from outside Cais do Sodré Station. From downtown, take the Glória funicular that goes up the hill from Restauradores Square, and walk to the left when you reach the top. You may ride the bus and the funicular for free with the Lisboa Card.


Admission and Tickets to São Roque Church and Museum


The church is free, but the museum charges admission (€2.50). There’s a 40% discount with the Lisboa Card.

Opens every day (only in the afternoon on Mondays)


Where to Stay by São Roque Church and Museum 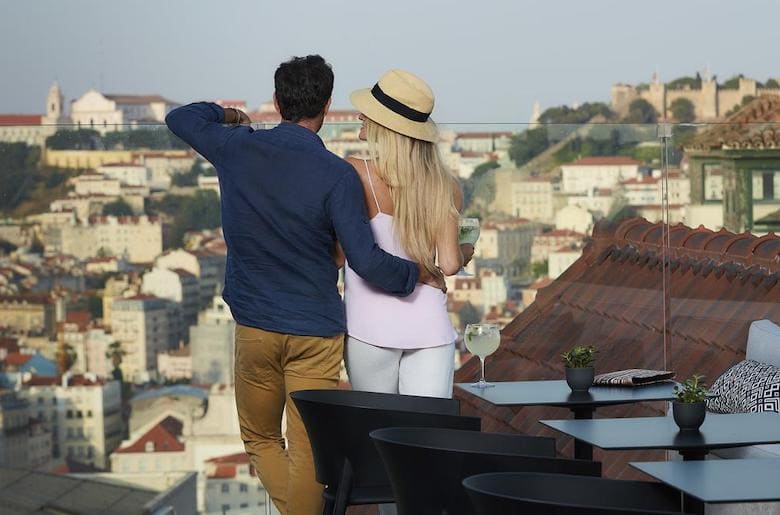 Just a few feet from the Church of St. Roch, facing the Glória Funicular, this hotel is known for its rooftop bar and restaurant with a view of the castle. It’s divided into apartments, and also has a wonderful spa.